Posted on November 5, 2018 by Argentbadger

Here is Barathrum, a character Warjack to go in my Warmachine Cryx force. In this context ‘character’ means that they are unique for some combination of fluff or game reasons; anyway, I can only have one Barathrum in my army regardless of how cool it is. The main reason I picked up Barathrum as opposed to any other Cryx heavy Warjack is that it is specifically allowed in the Scourge of the Broken Coast theme force, and since that is the one I’ve been buying miniatures for, I figured that Barathrum should also be in my collection. So far, I haven’t seen any particular synergies that link Barathrum to the Satyxis (about whom more later) that make up the majority of the theme force so I assume that there is some kind of story reason for its inclusion.

I really struggled to get started with Barathrum’s paint job since it is covered in various layers and raised edges I was hardly sure how to approach it. In the end, I more or less painted from the inside to the outside with black for most of the carapace and bronze for the edging. Of course, I also used pink for some of the bits and bobs to bring a bit of colour to the otherwise rather drab machine. There are also elements that I assume are supposed to be actual bone so I painted them accordingly; this is probably because Cryx are the baddy faction and prone to adorning their stuff with skulls etc. Indeed, they’d look quite fine in the Warhammer 40,000 universe. One of the things I like about Barathrum’s miniature is that it is rather more dynamic than most Warjacks in the PP range. Barathrum is clearly advancing whereas most of the other Warjacks are just standing around like they’re admiring themselves in a gym mirror (I consider this particularly fitting since they generally give the impression of having skipped leg day a few times too many). There are meant to be a couple of tusks on the side of Barathrum’s head but I couldn’t get them to look good during assembly so they went straight into the bits box.

I dedicate this post to Azazel’s Mechanical November Challenge. I’ll admit that this is a bit of a cheat because I was planning to paint Barathrum anyway and it just happens to coincide with the hobby challenge; still, it’s not like anyone has any money riding on this so I’m going to count it anyway. 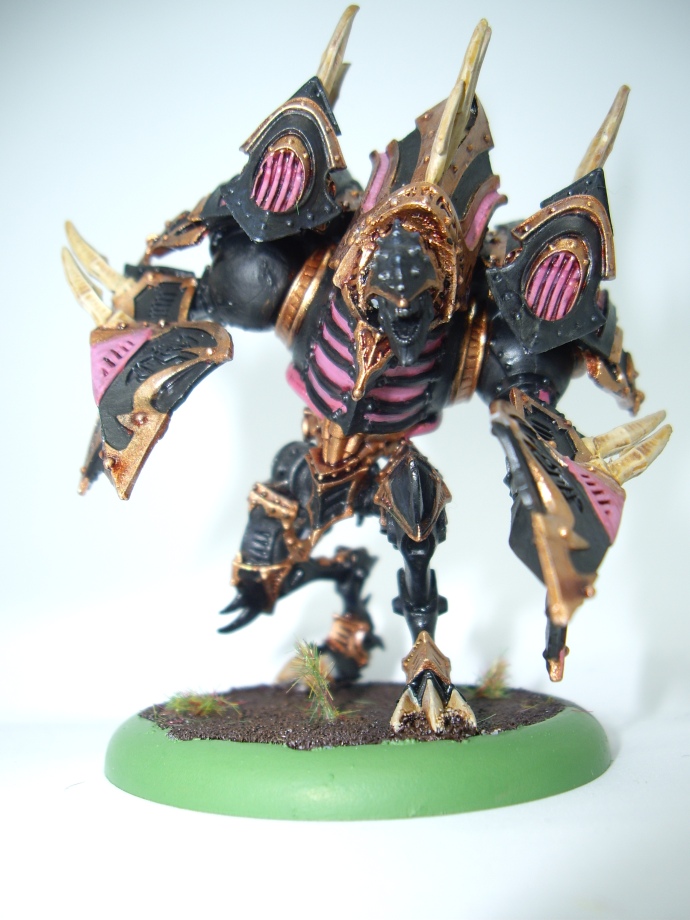 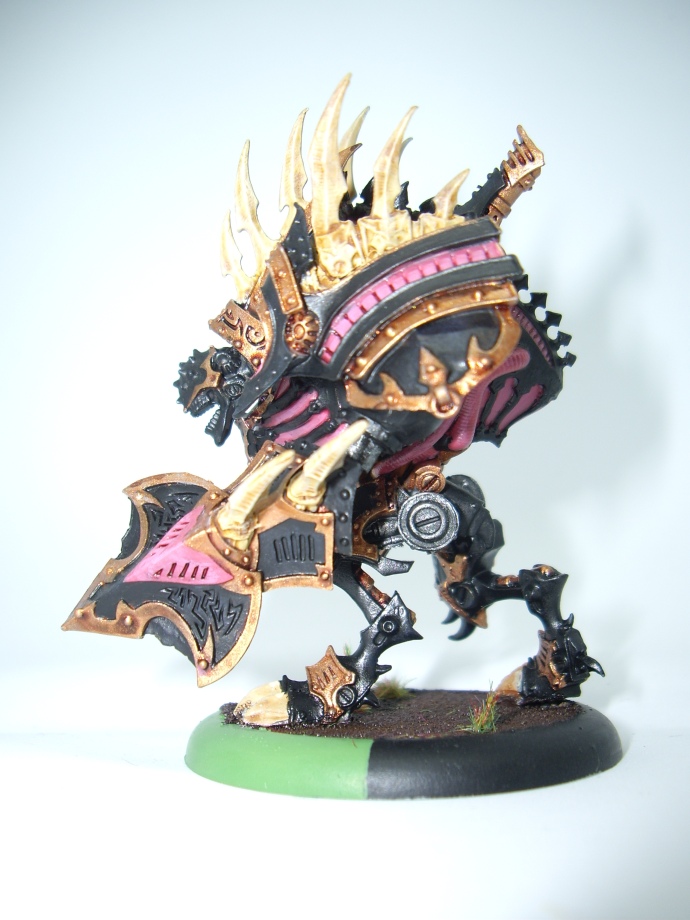 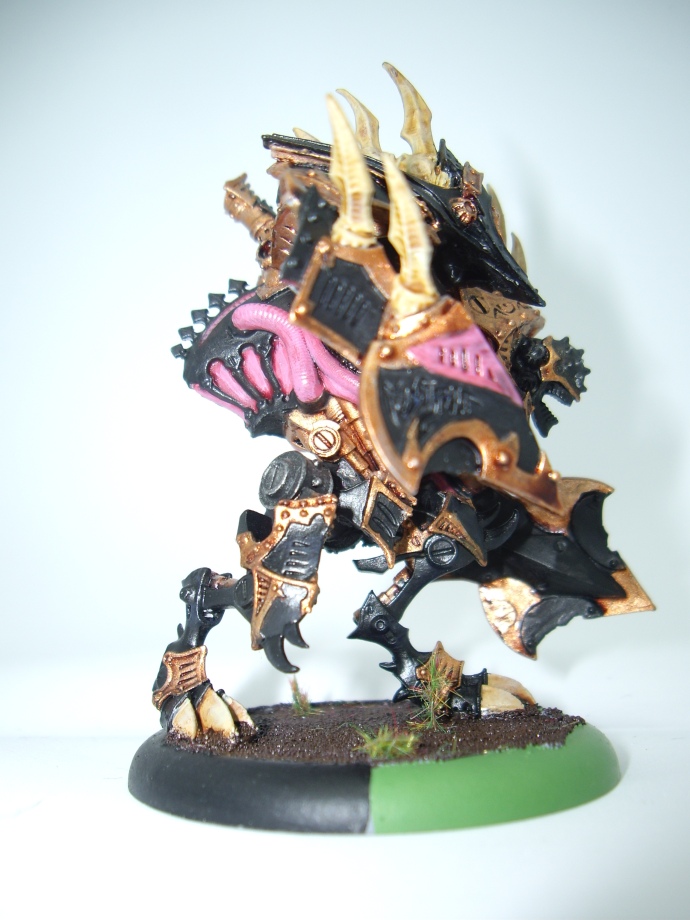 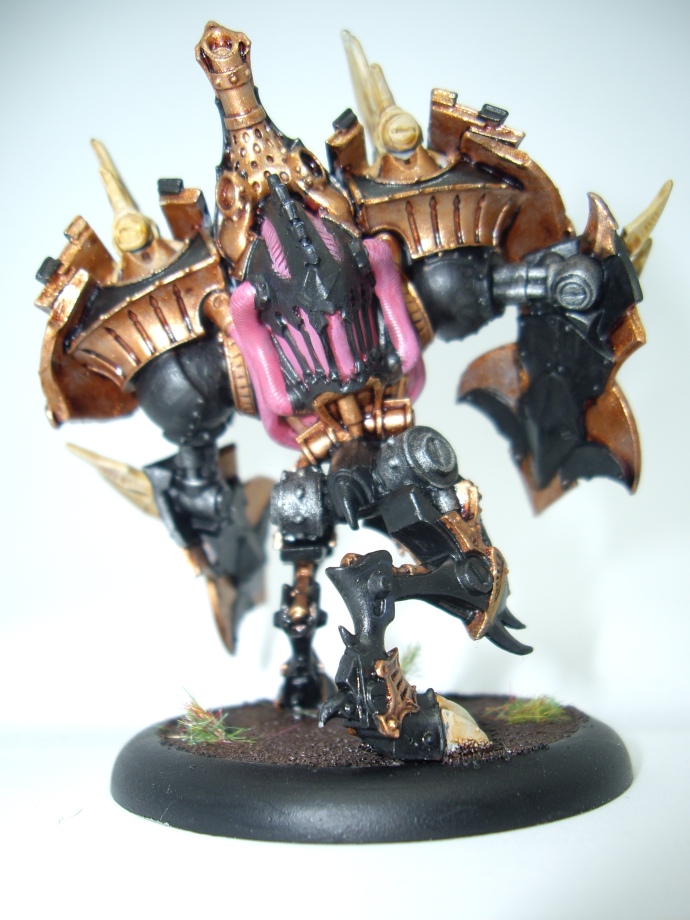 Next on the painting table: Hunzakut with Rifle and Light Grenade Launcher