After sorting out the rank and file cows for the Little Death tribe as a tester, I felt that I ought to put a bit more work into the command group.  Luckily I am now liberally endowed with unused bits and pieces from the Mournfang Cavalry and Ironblaster kits, which allow for a certain amount of kit bashing.  Of course, the main work was ‘feminising’ them, as usual. 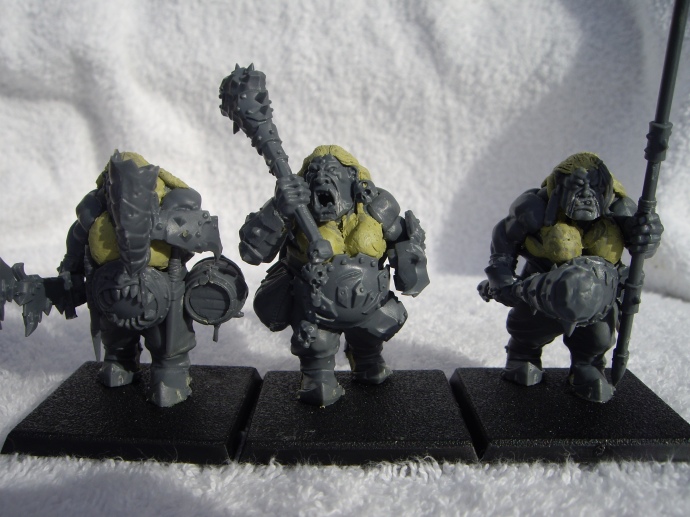 Hmmm, it looks like the musician is a bit shy.

Anyway, the champion is wearing a Mournfang Cavalry head, weapon, ironfist and gut plate, and an Irongut arm.  I feel that the skull ear-ring is a particularly cool bit of work from the sprue. 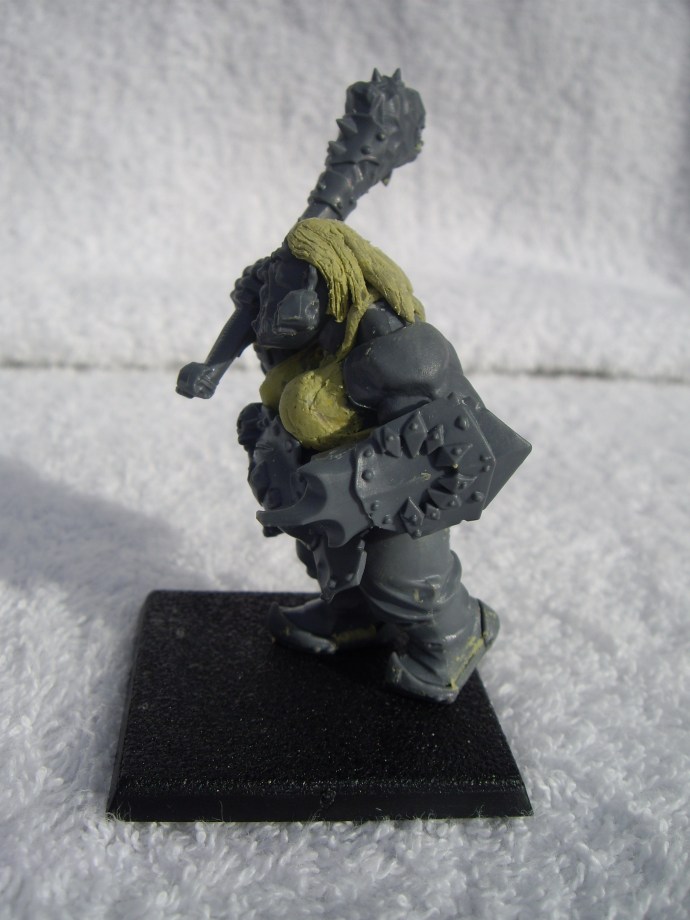 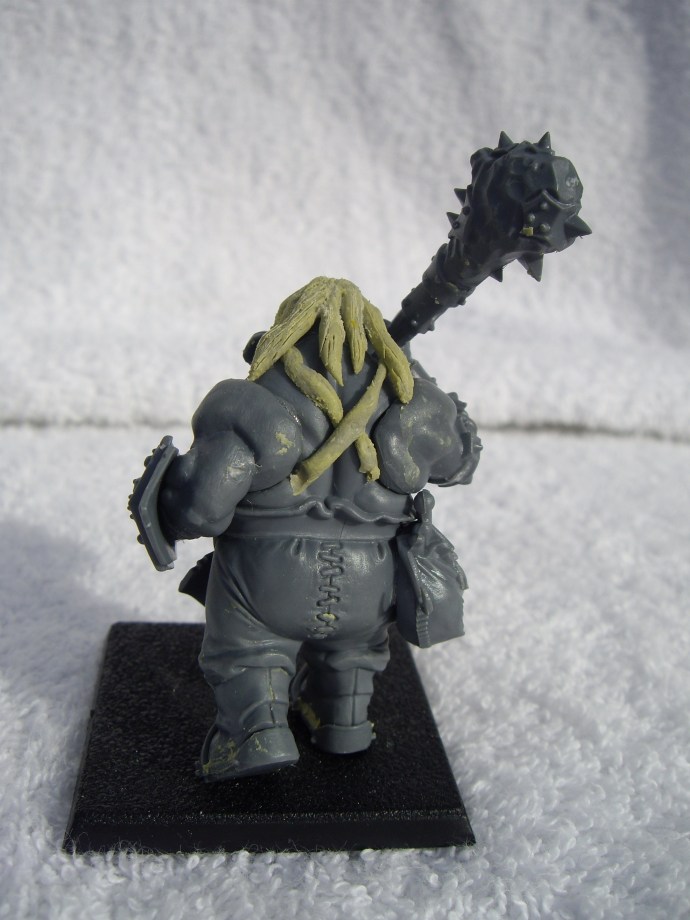 The standard bearer is mostly the original kit, though she does sport a weapon and head from the Mournfang box. I’ll attach the banner once the painting is complete.  The hair I’ve sculpted onto this one is probably the most satisfying I’ve done so far.  I like the way it lies across the shoulder. 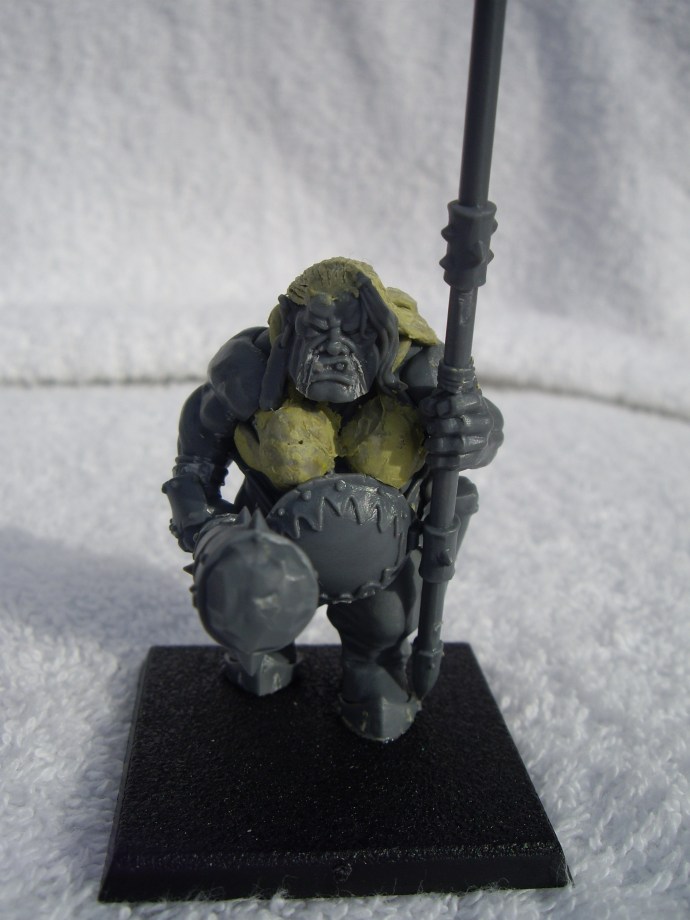 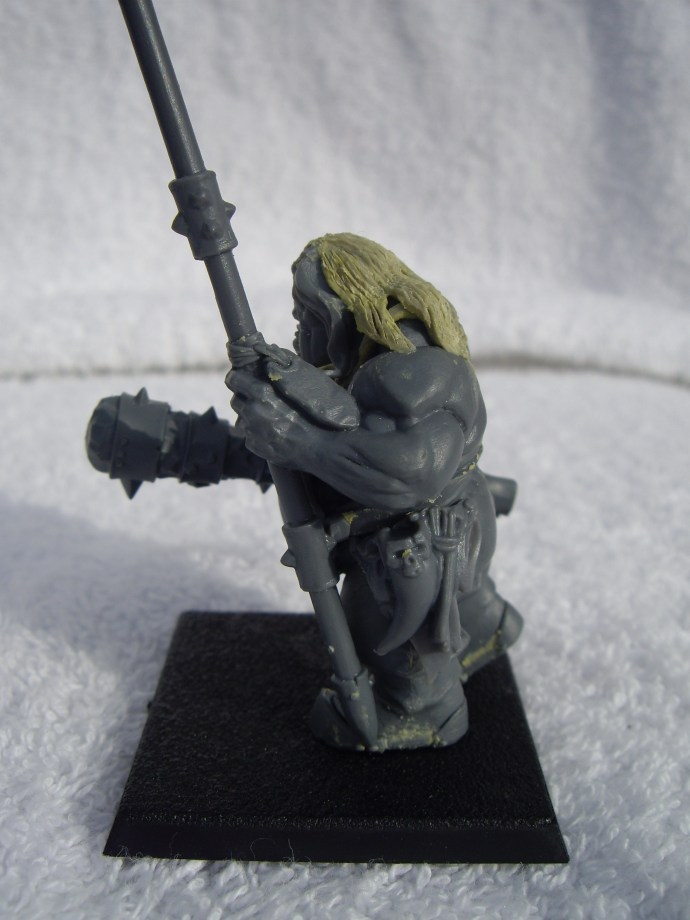 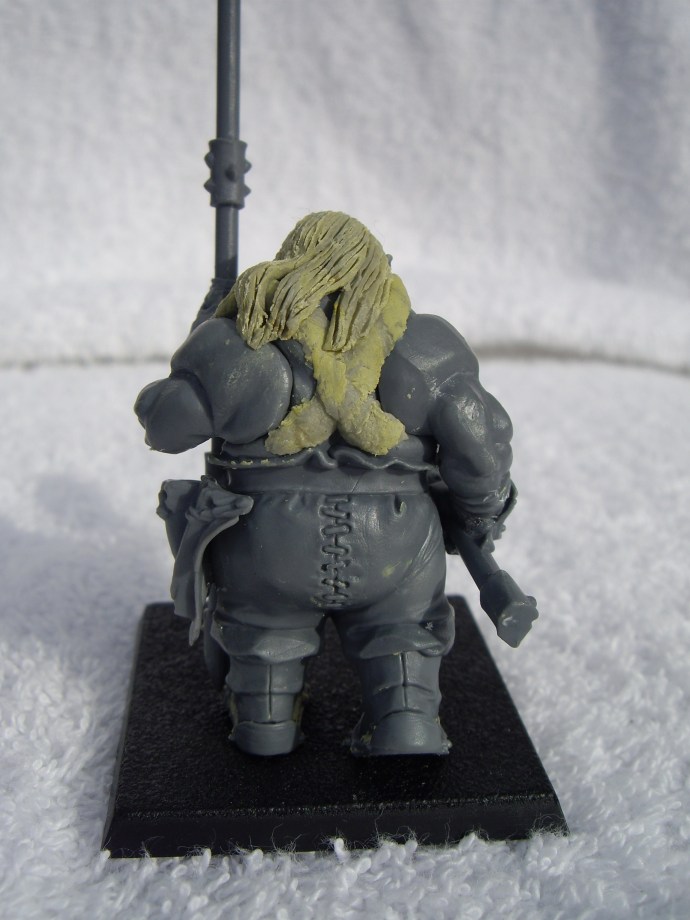 The musician actually has an instrument to play, courtesy of the Mournfang Cavalry (and a bit of cutting as the vambrace comes attached to the hand).  The sword is also from the Mournfangs (I think it’s meant to be for the champion), and the head is the less armoured of the two from the Ironblaster. 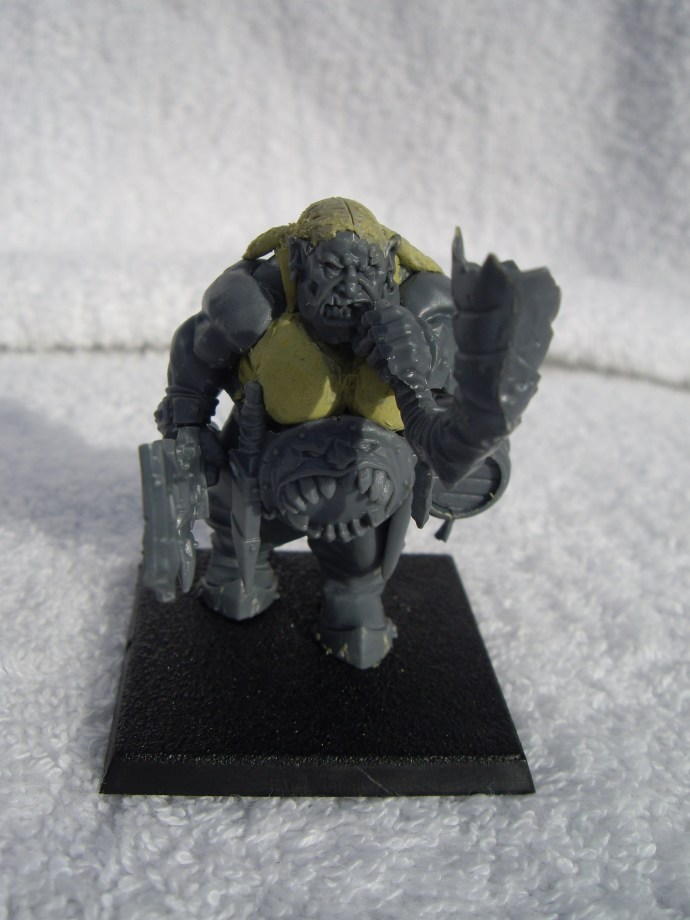 I’m looking forward to painting this lot as I feel like they have a lot of character.  So far I’ve been playing them six-strong in case I get the Watchtower scenario, but I’m not sure that they can take being in such a small unit if they’re in the main battleline.  So far they have tended to take a bit of a hammering before their turn comes; admittedly they hit back fairly nicely too if I can work to get a good match-up.

It’s taken a while, particularly since the Ironblaster turned out to be too tempting not to stick paint on, but here are the minor conversions on my Mournfang Cavalry.  I feel like two is probably not enough for these guys so I’ll eventually get round to bulking out the unit with another box.  This is part of the reason that these are just rank and file Ogresses as I will do the next box as musician and standard bearer.  The other part of the reason is that I am going to use the standard and horn for the command on my Ironguts and Bulls when I get round to it.  There are various swapped parts on the riders with other Ogre arms and weapons.  It’s a great feature of the range that almost all the bits are completely interchangeable across every unit.  Of course, the downside is that there are only two poses of Ogres on foot, but what can you do? 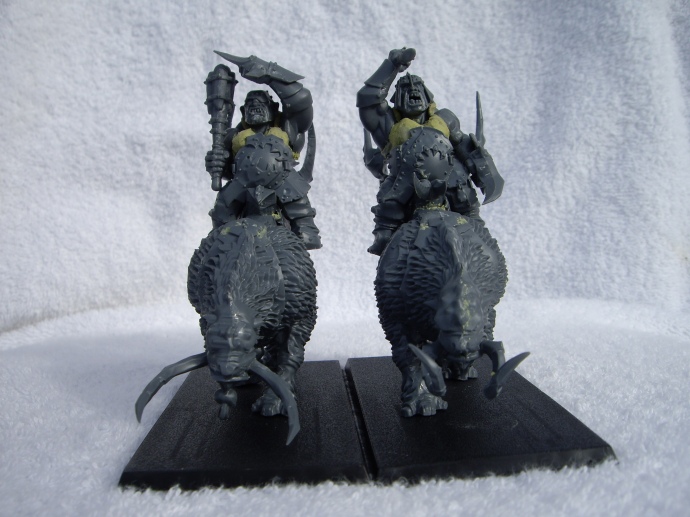 The Mournfangs themselves are fairly tasty looking miniatures, and I’m looking forward to painting them as I feel like they’ll be pretty easy to do with drybrushing.  Assembly-wise they weren’t quite as good as the Rhinox from the Ironblaster but a little gap-filling seems to have done the job well enough. 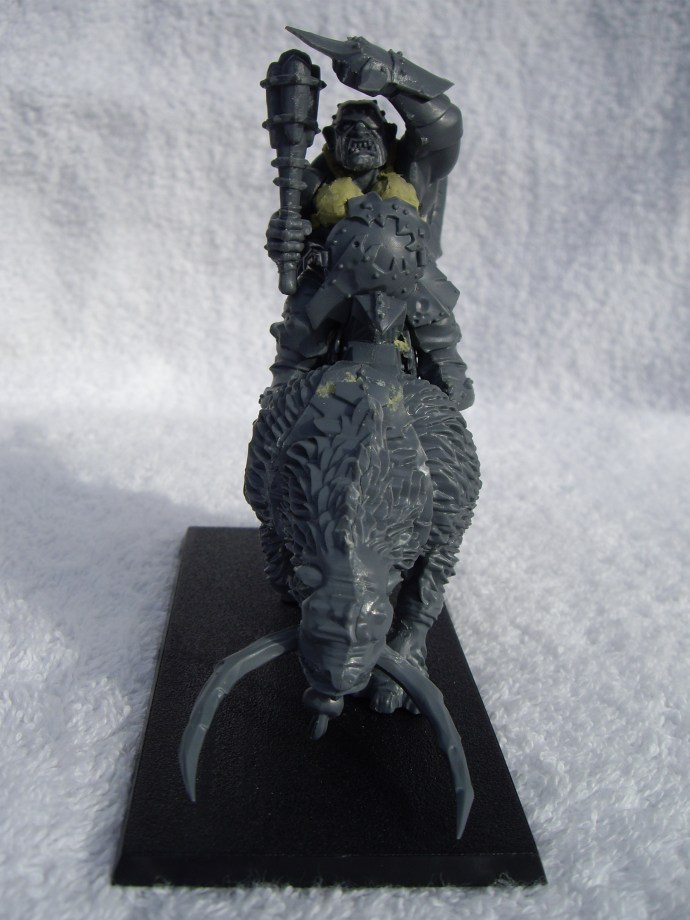 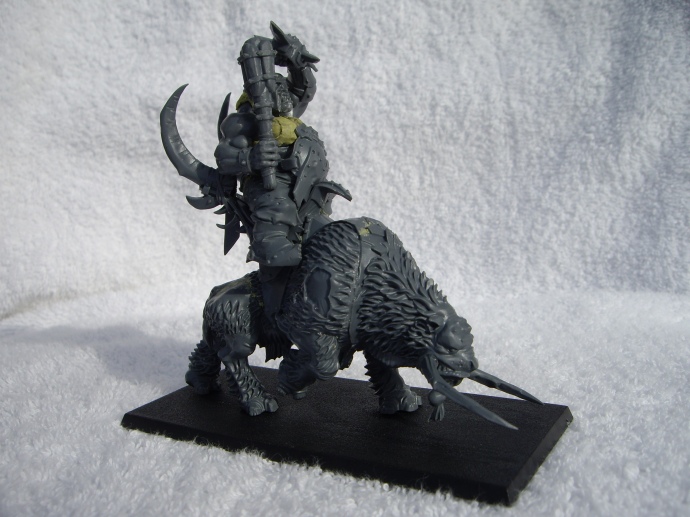 After the ridiculous number of sub-assemblies required by the Ironblaster I’m pretty glad that these are only in two parts; rider and mount.  I’m considering leaving them separate once they’re painted for storage purposes. 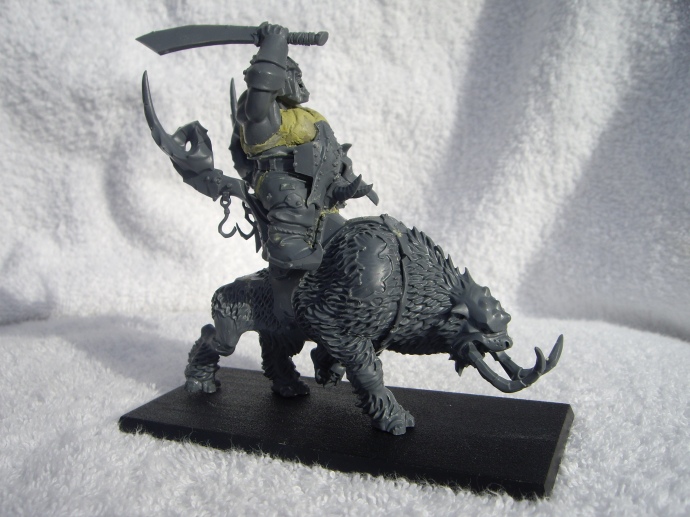 Mournfang Cavalry have had a pretty poor run in my games so far.  After 5 games, they’ve never survived, and only once done anything useful (holding up half a Skaven army for a few turns).  In their last outing against Forkbanger they ran off the table before my turn one when the terrain ate one of them.  Mind you, it was Storm of Magic.  Anyway they’re on the painting table now, but I’ve got a bit more sculpting work ahead of me first.