I got back onto the Infinity painting pile with this Druze Shock Team, this time bearing a Heavy Machine Gun. As with previous posts, she is part of the Druze Bayram Security sectorial within the Non-Aligned Armies. Heavy Machine Guns are rather straightforward weapons in Infinity, winning firefights simply due to large numbers dice being thrown. Needless to say, this makes them much more useful in the active turn where this can be brought to bear, rather than in the reactive turn where I tend to lose the HMG far too easily to snipers and other similar weapons.

This miniature (and the three which will follow in due course) is part of a different box of Druze Shock Teams which I think were sculpted at a different time. As a result they are a bit different from the previous four I posted, though of course they are plenty similar enough for my tastes. AS far as possible I stuck with the same colour scheme as the others so it will look even less obvious when seen as a whole force on the tabletop. I realised when painting this particular miniature that I’ve been indoctrinated by GW and other gaming companies to expect giant weapons, so the HMG here looks quite dainty by comparison.

My only complaint about the sculpt is the unforgivable crime of putting battle heels on. Funnily enough, this bothers me a lot more than the chainmail bikinis of the Witch Aelves. Probably this is because (in my mind) the Witch Aelves are a knowing pastiche of fantasy cliches while Infinity brands itself as a more ‘realistic’ interpretation. Anyway, as you can see, it didn’t bother me enough to stop me from painting the Druze Shock Team by way of some kind of protest… 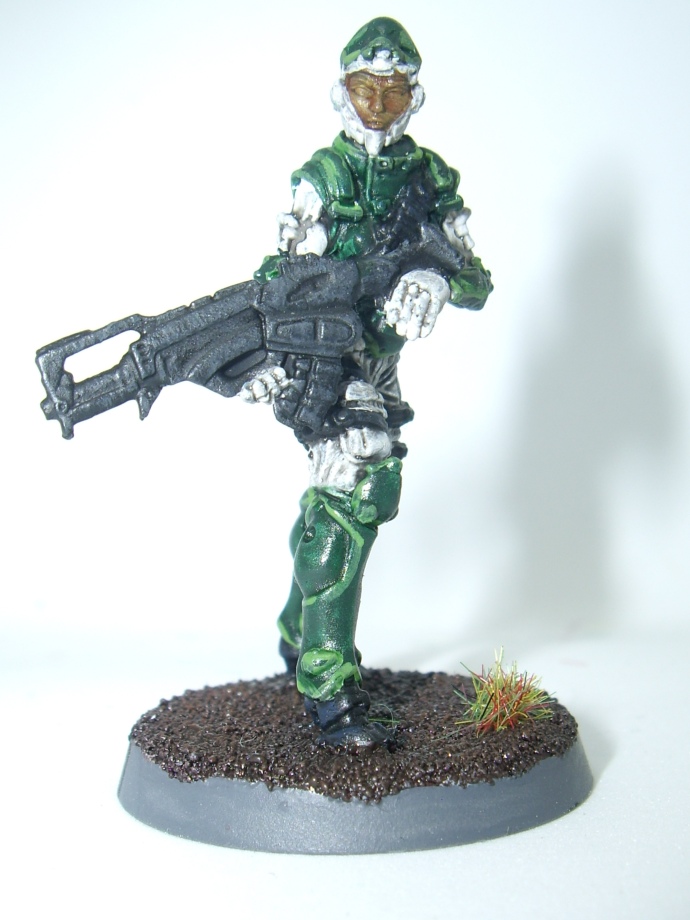 These lovable little critters are the second set of Troll Whelps for my Hordes Trollbloods army. There’s not much to say about them beyond what I wrote for the first set, except that these ones got a darker skin tone. This should hopefully allow me to work out at a glance which Whelps are from which group if I end up using two sets in a single game. 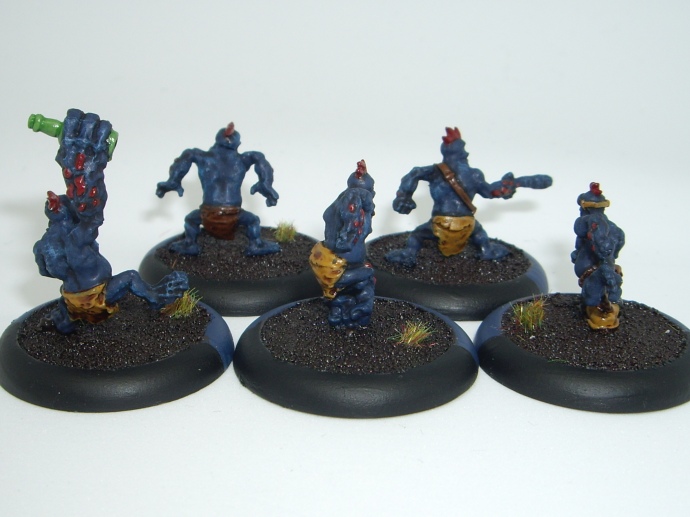 Next on the painting table: Druze Shock Team with Heavy Machine Gun.

Here are some Witch Aelves, the start of a burgeoning force of Daughters of Khaine for GW’s Age of Sigmar game. Appetite for Age of Sigmar seems to wax and wane somewhat at Chateau Argentbadger and I’ve actually ended up giving away the Slaanesh Daemons I had painted to a friend. So when excitement started to build again I treated myself to a couple of boxes of Daughters as they have extremely nice miniatures. Regular readers, if there are any, will know that I’m a sucker for a dynamic sculpt so an army of dancers seems like an easy sell to me. In game these are the basic troops available to the faction. With no ranged weapons there’s not much choice but to throw them right down the other side’s throat at the first opportunity. This suits my preferences nicely and has been fairly effective in a couple of games. The Witch Aelves are all attack and no defense (fittingly, considering that their choice of armour is that fantasy staple: the chainmail bikini) and I’ve lost the whole unit a few times simply by allowing the other unit to attack them before I could get my swings in.

These first three are the command group. I have to admit that it’s not super-clear who is meant to be the champion but we finally worked out that it is the Witch Aelf shown here in the centre on the basis that she has the biggest hat and the fanciest knives.  The lighting is showing the skin up as a bit shinier than it really is but I’ll put that down to bad photography rather than bad painting.  The white hair is part of my ‘vision’ for the force – how I imagined them looking even when I was buying the kits. 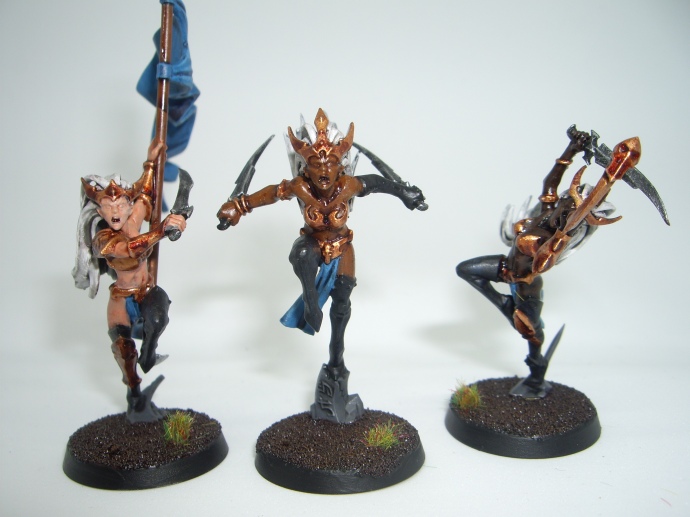 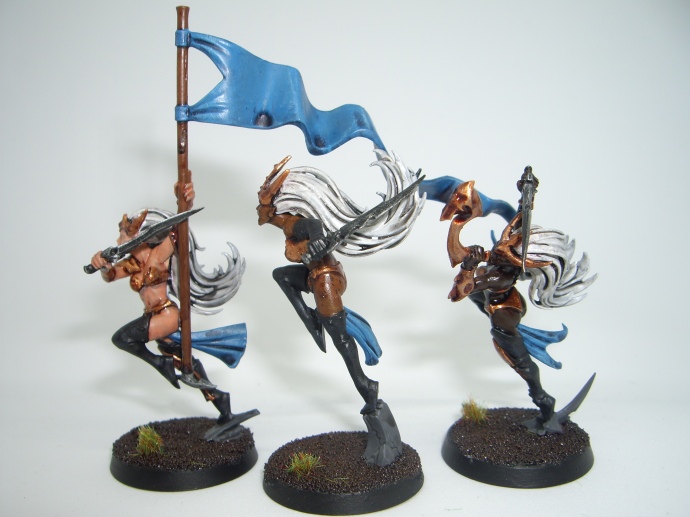 The light blue brings a nice bit of colour to the unit along with the bright white hair.  I thought about doing the gloves and leggings the same colour but decided it would be too bright.  If this army lasts long enough in my attention to require a second unit I’ll probably go with red cloth to differentiate between them. 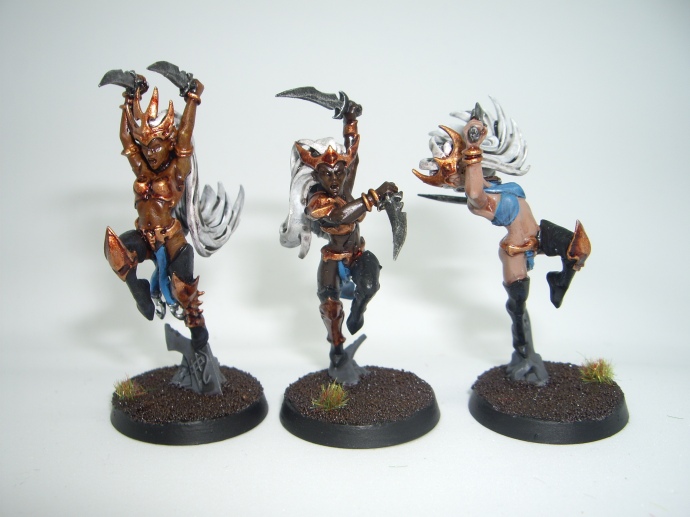 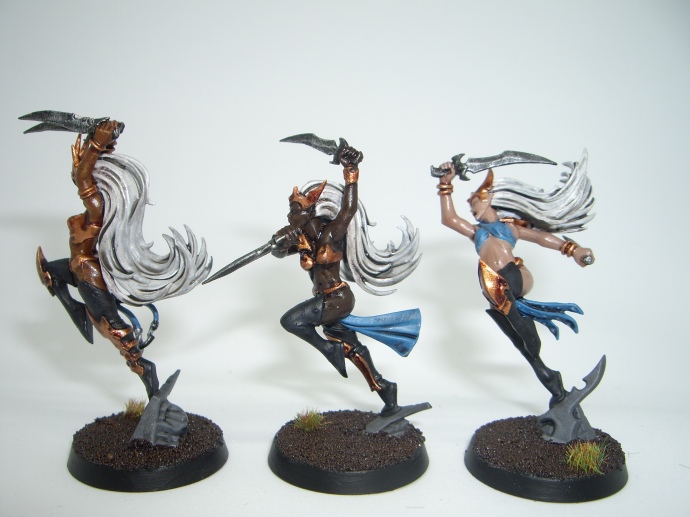 I feel that the bronze armour gives a bit more contrast with the skin than my other choice which would have been the steel colour of the knives.

Finally, the unit all together. 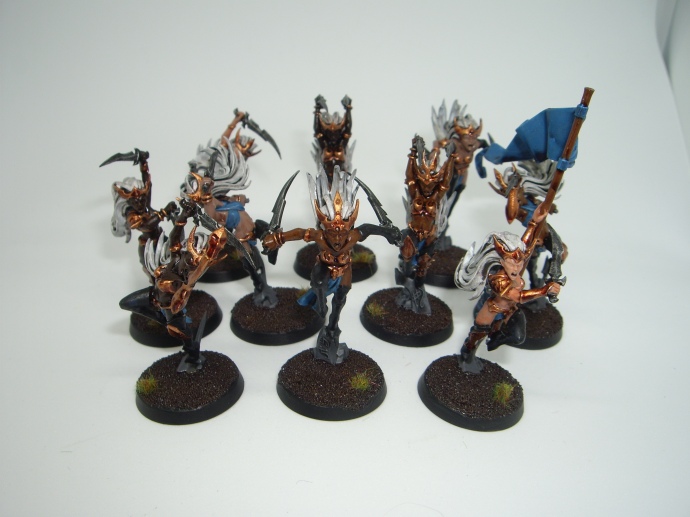 Next on the painting table: Troll Whelps (again).

The chap is the Stone Scribe Elder for my Hordes Trollbloods army. He’s the Command Attachment for the Krielstone unit I painted a while ago. Having a Stone Scribe Elder keeping the Krielstone bearer company allows some additional benefits for being under the Krielstone aura; you get to pick one of the three each turn. Firstly is more strength – obviously this is the simplest one and therefore the one I use most of the time. Second is making Incorporeal enemies stop being Incorporeal so that they can be it with normal weapons. I can see that this would be useful if I faced those types of armies, but it hasn’t come up for me. On the plus side, it has an amusing name of Spirit Chaser (a pun since part of the Trollblood story is that they really love to get drunk). Finally I can choose to put out fire and other continuous effects on the rest of my army. In theory this sounds good but in practice I find that my little dudes are already dead from whatever applied the fire and the big ones don’t really care much about another low-POW damage roll.

I enjoyed painting the Stone Scribe Elder; he’s covered in various scrolls, belts, lockets and other kinds of bling that meant it took ages to complete the job. The green clothes are to match the rest of his unit, although since I’m limited to one of each in any army it doesn’t matter much apart from aesthetically.  I do find the way that the cloak billows out rather odd since there’s no movement at all in the rest of the miniature; perhaps that beatific expression is due to a particularly satisfying fart. 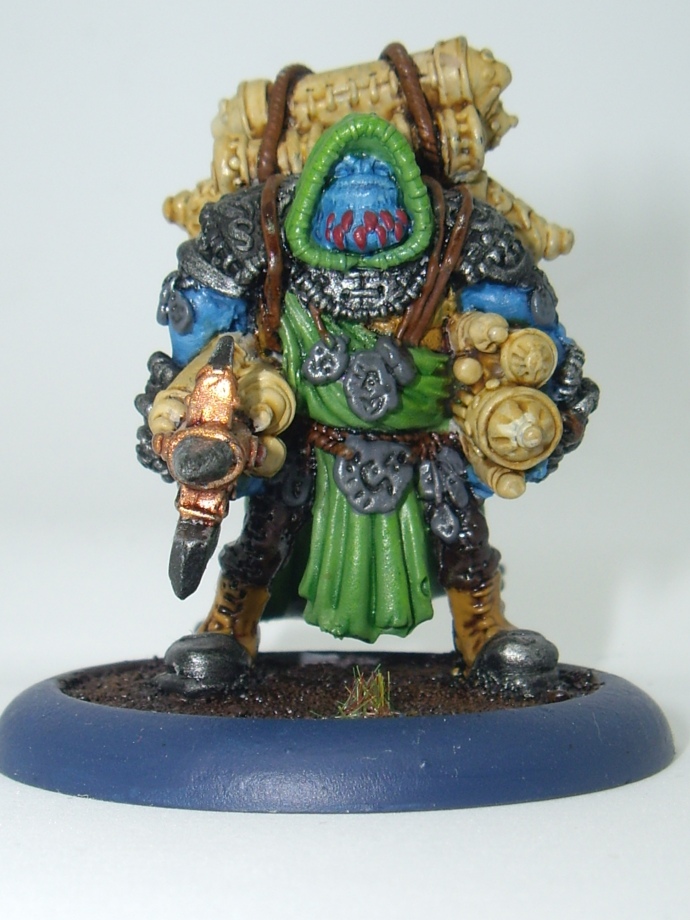 Next on the painting table: Witch Aelves.