This is Mulg the Ancient, a character (i.e. unique) Warbeast to go with my growing Trollbloods army for Hordes. Mulg is a fantastic beatstick, especially with Rage and Stone Strength applied. Indeed, Mulg probably could simply walk into Mordor… at least if he went fast enough to ever get there. As a result of this lack of threat range I’ve generally used Mulg as a second wave to sweep up whatever kills my front line. He also has a few tricks like being able to dispel incoming magic (quite rare in Hordes as far as I can tell) and can regenerate lost hit points at the start of a turn for free. Mulg costs a lot of points but I’ve always found him worth it, either in terms of his actual damage output or the effort required to kill him before he smites important stuff with his Runed Club.

As befits one of my Trollbloods, Mulg has blue skin and red… stuff on him. In Mulg’s case, the line between hair and random rocky outgrowths is blurred further by apparently having an actual boulder sprouting from his back. The official Privateer Press version of the paint scheme differentiates that from the hairy stuff and colours it like rock, but I felt that was too silly (or perhaps not silly enough) so I doubled down and did it all in red. I’m not a huge lover of Mulg’s sculpt; the tiny legs and huge arms/body of other Trollbloods is overly exaggerated here and despite being on a 50mm base his club sticks out in a way that it quite annoying for gaming purposes. He’s also made of metal which means the miniature weighs much more than the other Trollblood Warbeasts and meant that I had to pin just about every join during assembly. As is typical of Privateer Press sculpts, there were some substantial gaps to fill once I was done. So after all that I was pleased that the painting same out quite nicely. 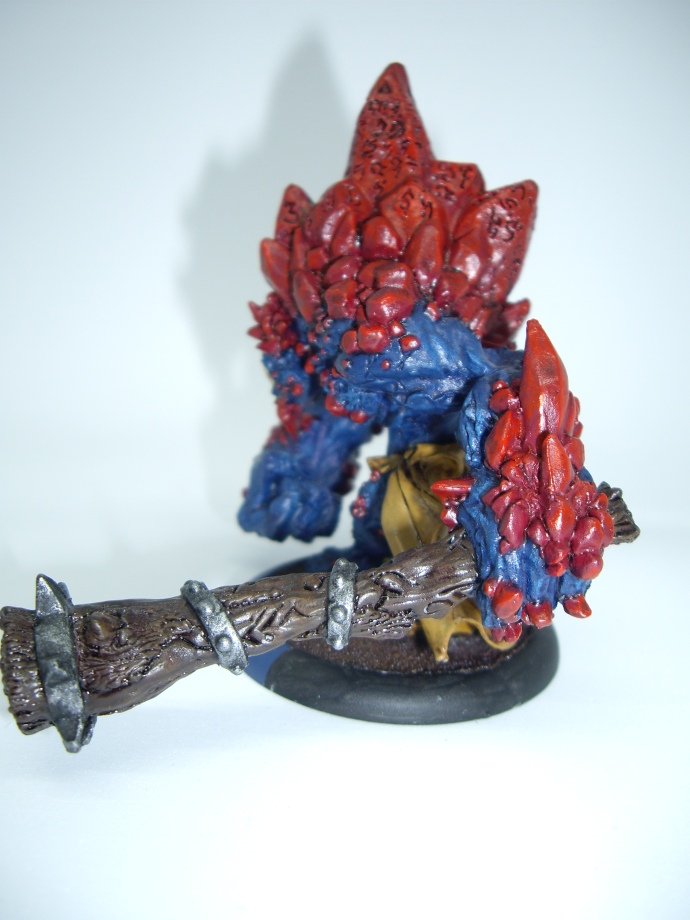 Next on the painting table: Barathrum

3 thoughts on “Painted Mulg The Ancient”