I finally acquired and painted Death Marshals for my Malifaux collection. The Lady Justice box from which they come was out of stock for ages at the start of the year when I began picking up plastic Guild and I’d borrowed some of Joe’s Death Marshals and gradually got comfortable using them instead. After a very late birthday present I got the options to actually use my own Death Marshals for a change. I really like theses little chaps in the game; they’re really good scheme runners with Unimpeded and are generally tough enough to fight their way through most things that will compete with them out wide. They also have hilarious utility with their Pine Box action to bury anything that comes to get them. Of course, their most famous trick is to bury Papa Loco after he has used his Hold This ability on something with a good damage track to stop him activating again and hence removing the effect and also to stop his sorry slow self being blown up in the middle of my crew. With Hard To Wound they can hold out for a while (and drop scheme markers when they die anyway) but Death Marshals really hate seeing anything with minimum damage of 3 or more.

I have mixed feelings about the miniatures themselves. The whole concept of the Death Marshal is really nice, but one of them (the crouching one) is much bigger scale than the other two, and I feel like the one with his foot on the coffin has a slightly unnatural pose (and also is a somewhat unstable on his base). I did very much enjoy painting them though. In addition to the red I’ve been using for the majority of my Guild, I wanted these to tie in with my Outcasts as Tara can take them via an upgrade. So I made the flames look magical rather than realistic, choosing to take them from white to purple by way of the pink that I liked on the Freikorpsmen. The flames don’t look so great in a zoomed in photo, but I actually felt that they work well enough at table top range. 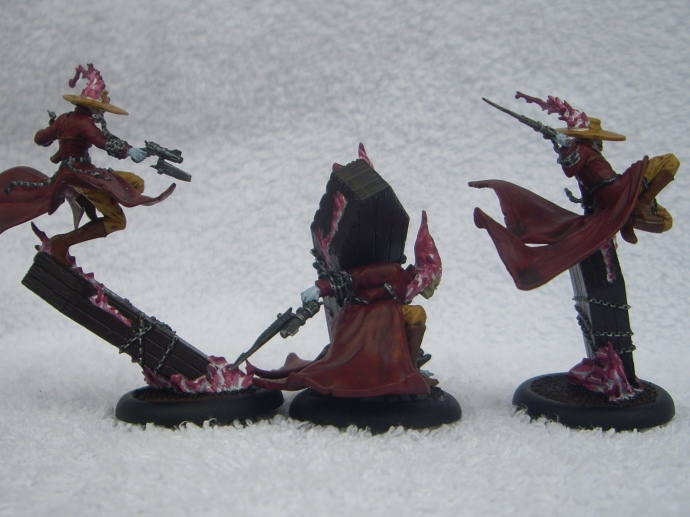 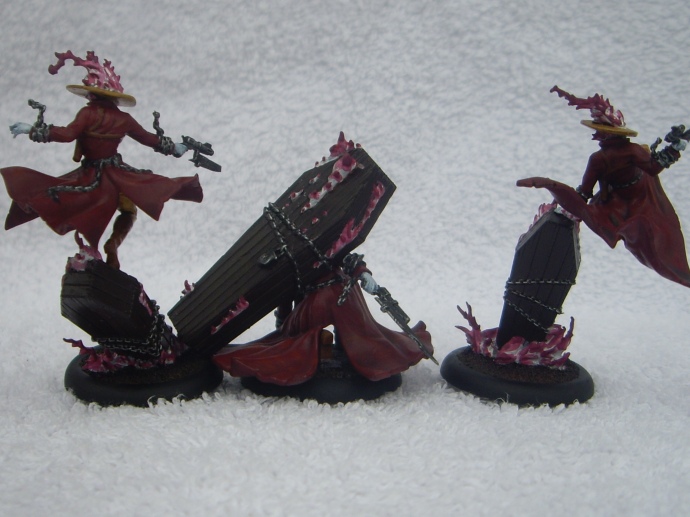 Next on the painting table: The Nothing Beast.

Here are Cylena Raefyll and her Nyss Hunters from the Warmachine Mercenaries; they’re not very picky though and will work for quite a few other factions. They have great defence but terrible armour, and are therefore in theory quite nice with the Warcaster Gorten Grundback as he can protect them from blast damage with his Solid Ground spell. In practice, the Nyss are really fast and Gorten is really slow (and wants to be at the back anyway) so quite often they are too far away from him to benefit from Solid Ground. Still, I really like the Nyss as they are fast and have a variety of cool special rules that let them do what I need most of the time, which is usually kill a few things and then be annoying to get rid of in return.

I painted the Nyss Hunters with mostly green armour, partly to match up somewhat with the primary colour on my Press Gangers and partly because even in a fantasy world where giant robots painted in bright reds and blues punch each other repeatedly, it seems worthwhile to dress in mostly natural colours if your plan is to hide in a wood. Putting the Nyss together was rather frustrating as the arms, body and weapons are all separate and have tiny contact points that require extensive pinning. I was quite glad to persevere through it as hopefully it will make the miniatures more robust in play and transport. I also did a little plastic surgery on the grunts (i.e. not Cylena) as they originally came with really big crooked noses that made them stand out as markedly different from their leader. Possibly they are meant to be related to Mortiis. Either way, I trimmed the noses a little.

Cylena Raefyll allows an extra rule while she’s in play and is fractionally better at fighting than the rest of her unit. As a result, she is frequently the first to die; of course this is really due to my poor play. For reasons that are not clear to me, she not only uses a different set of armour to the other Nyss Hunters, but rather impractically chooses to bare her midriff despite the backstory for the Nyss being that they hail from the frozen North. 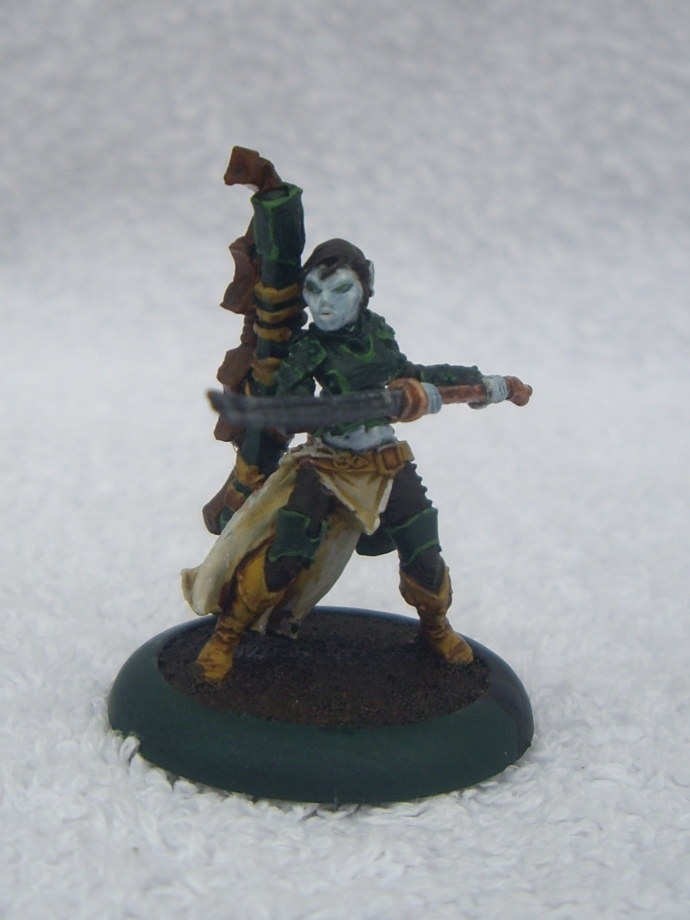 There are only two weapons, two heads and three body types for the grunts so I tried to put them together to get variety.  Even so I think I did end up with a couple of identical twins.  Still, this is normal in Warmachine; the Press Gangers literally have duplicate miniatures.  At least one advantage to the huge number of bits that needed to be assembled for the Nyss Hunters is that they have a small amount of customisability. 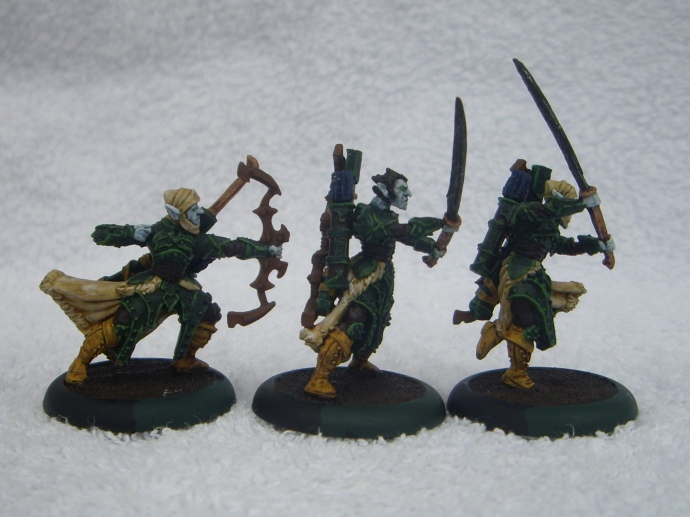 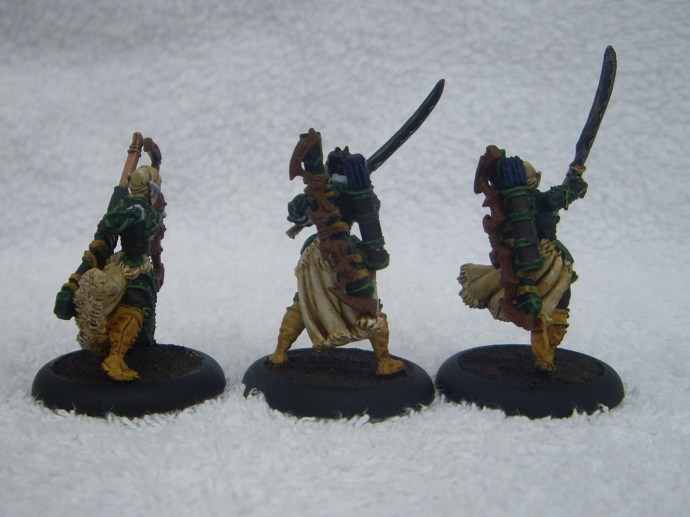 Warmachine seems to be very big on the ‘what you see is what you get’ that was common in Warhammer 40,000 when we played that.  Hence all these miniatures have to have both bows and claymores to represent the relevant rules in the game, even though I think that the bows look a little awkward on the sword-wielding ones’ backs.  I couldn’t think of anywhere more appropriate to put them though. 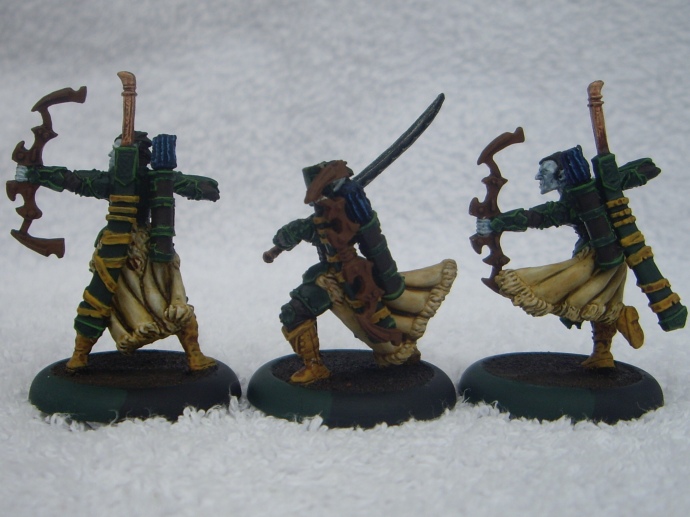 I tried to emphasise that they are not just pointy-eared humans but giving the Nyss a very pale white skin tone.  This is just white with blue ink, then highlighted back to white again. 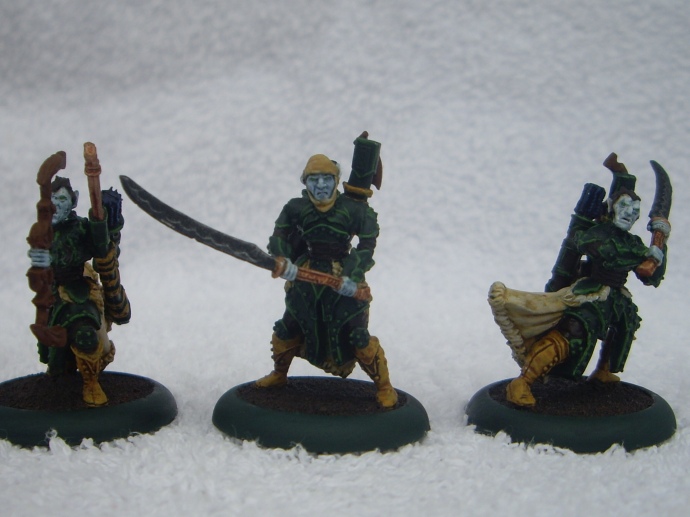 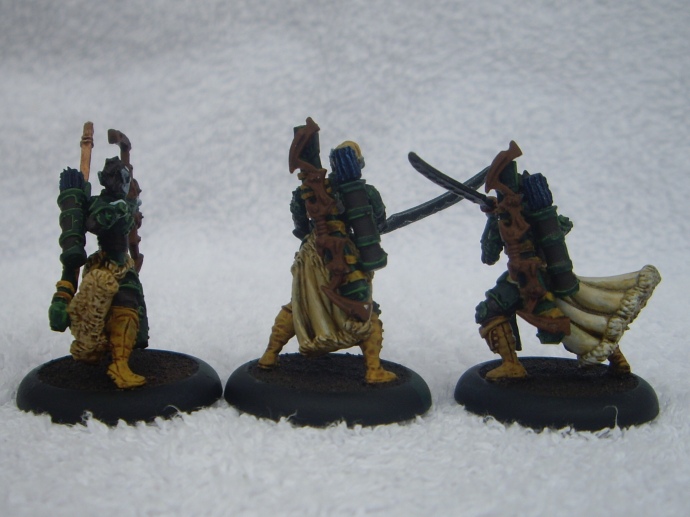 Next on the painting table: Death Marshals.

Here is Killjoy, iconic Mercenary from the Outcasts of Malifaux. Killjoy is a raging killing machine, capable of cutting through swathes of crews at a time; of course this is to be expected considering his hefty price tag. So far I’ve only tried the big chap with Tara, who can mess with his bury / unbury shenanigans and make him Fast for even more nastiness; in addition she can rebury Killjoy to avoid him rampaging around my own crew or taking too much heat in return. The simplest way to play this is to move up Tara aggressively in her first activation, then use her second to unbury Killjoy and make him fast. Killjoy is then thrown forward into a target of choice and can put out 8 to 12 wounds of damage fairly reliably between his high number of attacks (4 on the unburying turn, plus occasionally he’ll generate more with his Onslaught trigger). I’m still undecided whether the best option is to target a single high value target or a cluster of relatively easy victims and I suppose that the answer will differ on a game-by-game basis. It isn’t too difficult to take out Killjoy once he has been fired, so effectively I trade him each game for a couple of small pieces or one big one, plus a few activations to actually kill him.

I painted Killjoy with pale skin to match the Enslaved Nephilim, to whom I suppose he must be related. I haven’t decided if I’ll stick with this theme if I ever pick up any Neverborn. The skin is simply white paint with a blue wash, then re-highlighted with white again. The pink is to link Killjoy visually to the Freikorpsmen; again I am not sure if I’ll stick with a pink motif throughout the Outcasts or if I’ll eventually run out of places to put that colour without it looking (more) silly. I do love to paint pink. 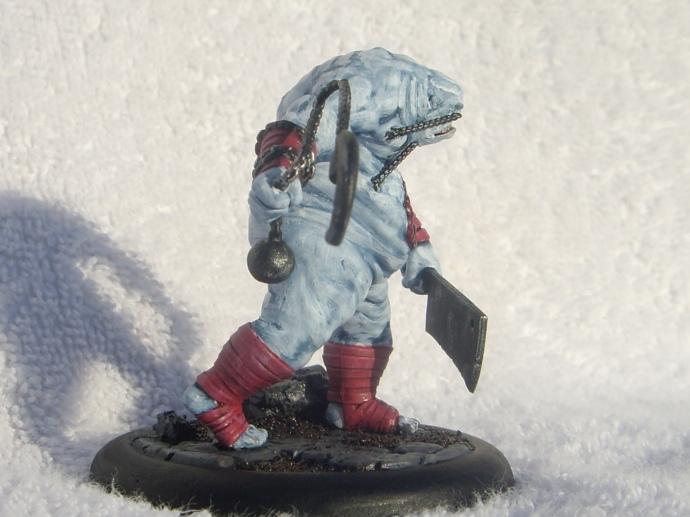 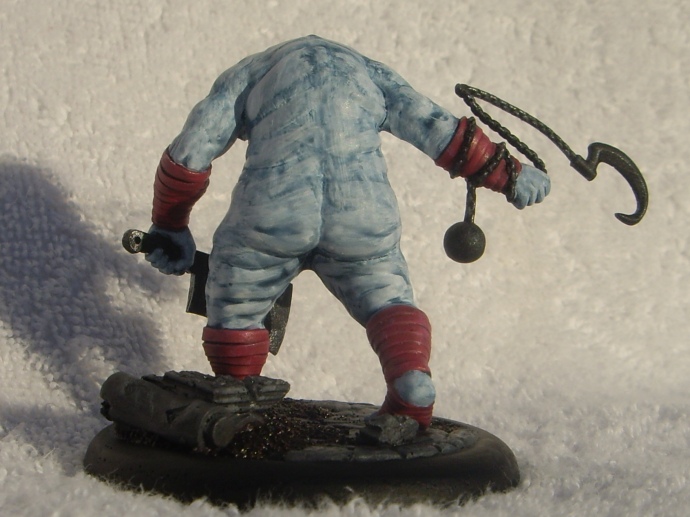 Next on the painting table: Cylena Raefyll and Nyss Hunters.