This is a Boomdakka Snazzwagon, the first part of an Ork army for Warhammer 40,000. Orks in 40K are broadly split into two groups – football hooligans and Wacky Races. Of the two, Wacky Races is very much my preference and now that GW have released a raft of comedy buggies I decided that it would be a great time to pick a few up for painting purposes. Who knows, I might actually play some games with them at some point. The Snazzwagon’s main purpose appears to be clearing light infantry with sheer volume of fire but it also has a built-in penalty to be hit by incoming weapons and is quite cheap so I suspect that it’ll end up sitting on an objective in the backfield somewhere.

The kit is everything I dreamed of from a modern GW kit. It’s loaded with detail and characterful inclusions. For example, the passenger footwell is filled with empty beer cans and spent brass which is think is a beautiful touch considering that the roof pretty much means that this is hard to even see on the finished model. I went with blue and white as the main colours; mainly because I can’t bring myself to paint any of the vehicle green as it would clash with the crews’ skin. Thematically I think that this makes them members of the Deathskulls Klan but of course I’m a filthy try-hard so I’ll play them as whichever Klan gives the most entertaining mechanical advantage. 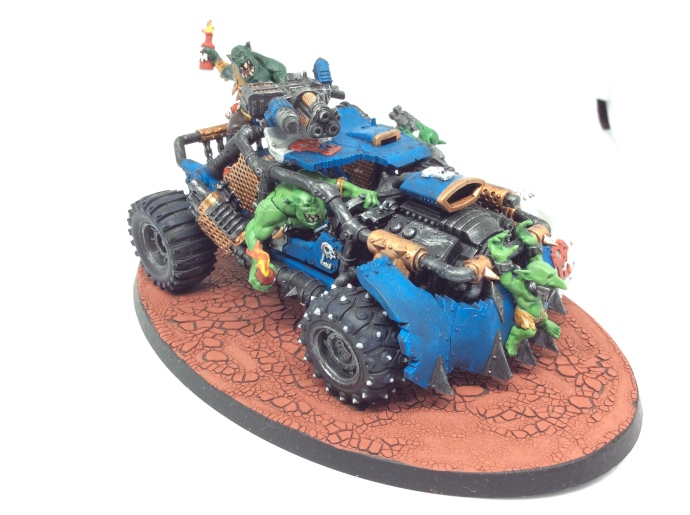 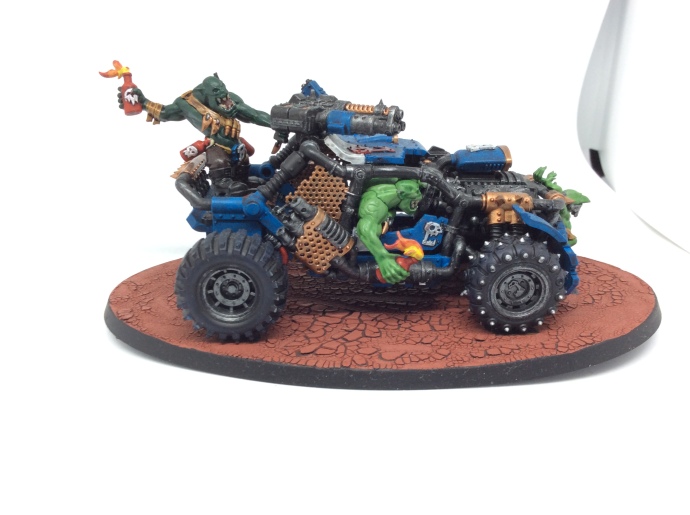 This chap really exemplifies the Kult of Speed for me – he’s not driving, he’s not even bothering to aim, he’s just hanging on to the back of the buggy and whooping and hollering away.

I love the sheer enjoyment on the driver’s face, but the fact that I missed the huge gap in his shoulder and then made it really obvious with the way the wash pooled is quite annoying.

This little Gretchin is probably meant to be firing the gun in the passenger side but for some reason he’s decided it’ll be more fun to hang out of the window and fire the most useless weapon into the entire game.

I’ll admit that some people might think that the main inspiration for the Kult of Speed is Mad Max and not Wacky Races. Even if they’re wrong, they can quite reasonably point to this blood bank dressed up as Tom Hardy’s character in Thunder Road.

Next on the painting table: Steelhead Halberdiers.