This is Eiryss, Mage Hunter of Ios, another solo in Warmachine for the Mercenaries faction. This particular Eiryss is Eiryss1; there are 4 versions of her in existence at the moment representing her at various stages in her story. For this reason and others, I suspect that Eiryss is a PC in a hypothetical ongoing RPG played by the developers at PP; she shows up a lot in the stories and is one of only a handful of characters to get a fourth iteration. Eiryss has lots of rules that enable her to mess with Focus allocation and she’s ridiculously accurate with her main crossbow. I just never seem to have the space to fit her into a list; in theory she would be brilliant in Soldiers of Fortune (where she can be free) but in practice she has never made the cut for me. I’ve been stung by Eiryss in Joe’s hands plenty of times though, so I have no doubt of her efficacy.

This version of Eiryss is the first and therefore the oldest sculpt, and it shows. The miniature itself is rather two dimensional and the detailing around the face in particular leaves a lot to be desired. On the other hand, I do really like the dynamic pose and I think that the sculptors did well for the time. Even though Eiryss could theoretically appear in a Soldiers of Fortune army I wanted her to be very distinct from any Steelheads as she is very much a free agent. That, combined with the cloak and hood that she wears, led me to for a Little Red Riding hood look which I think works rather nicely. She was a quick and easy paint and I’m very satisfied that she’s ready for the tabletop. 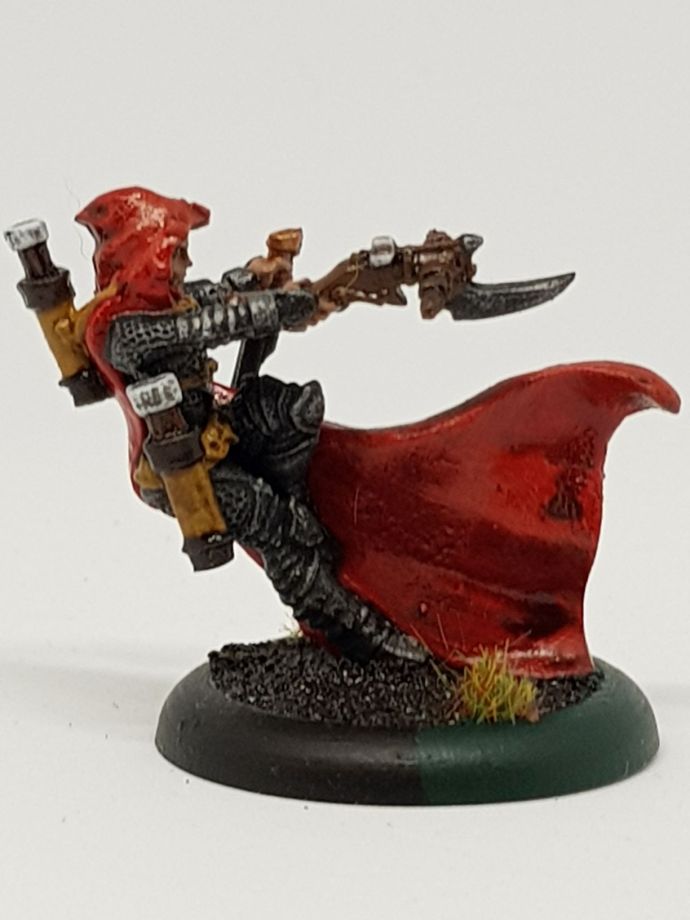 Next on the painting table: Grundback Blasters.