Allan and I got together via Wartable for another round of Warmachine. I did ask if he wanted to avoid yet another game into Fiona but he was happy this time.

This is more of the same; I’m very happy with the way that the list plays together despite a few missing options (mainly I seem to miss repair) so I’ve not changed anything. I’m tinkering with an Ossrum list in Soldiers of Fortune but I can’t get it to line up quite right and I’m not really sure that it answers any different match-ups anyway. Also, I’m not really good enough at the game to assess what is or isn’t a good match-up yet. Note that I accidentally clicked Volley Guns instead of Cannons when we played so the pictures are slightly wrong. It’s kind of embarrassing to have proxied models in a browser version of the game.

Khador
[Theme] Jaws of the Wolf

This, or at least some variation on it, is Allan’s list to pair with a swarm of Doom Reavers. It certainly asks very different questions, specifically ‘can you chew through all these boxes at ARM20?’ I was really interested to see how this game would go.

I win the roll-off but decide that I prefer to lumber Allan the side with all the annoying terrain; he takes the first move. My vague plan is to gum up his Warjacks on Halberdiers for as long as possible and score scenario until I win. Looking at the right side of the board I reckon that I can jam up his Warjacks with that house and keep them out of the zone to hopefully rack up a decent score elsewhere. The Halberdiers on the right are Cultists. 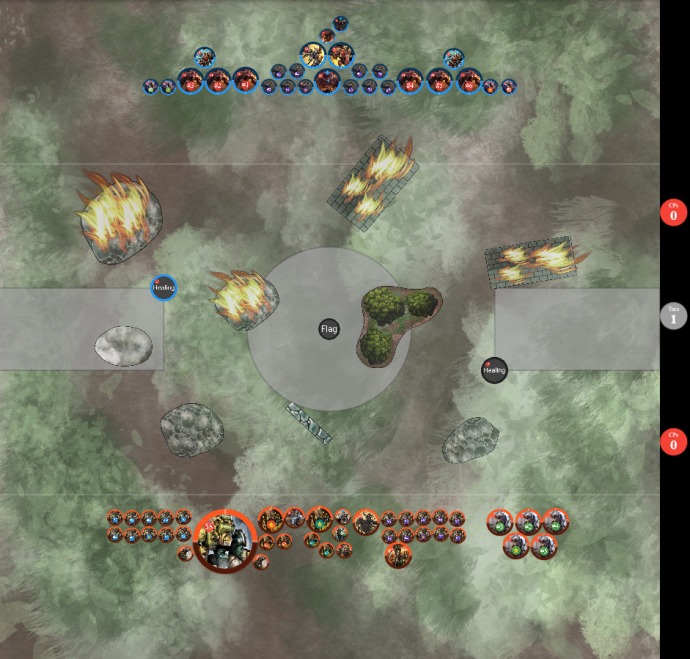 Turn 1: Khador
Everyone runs! Slightly to my surprise, Sorscha also runs instead of casting any spells. Karchev casts Battle Charged and makes sure to stay close to the Rager, though I doubt I can get anywhere near him. 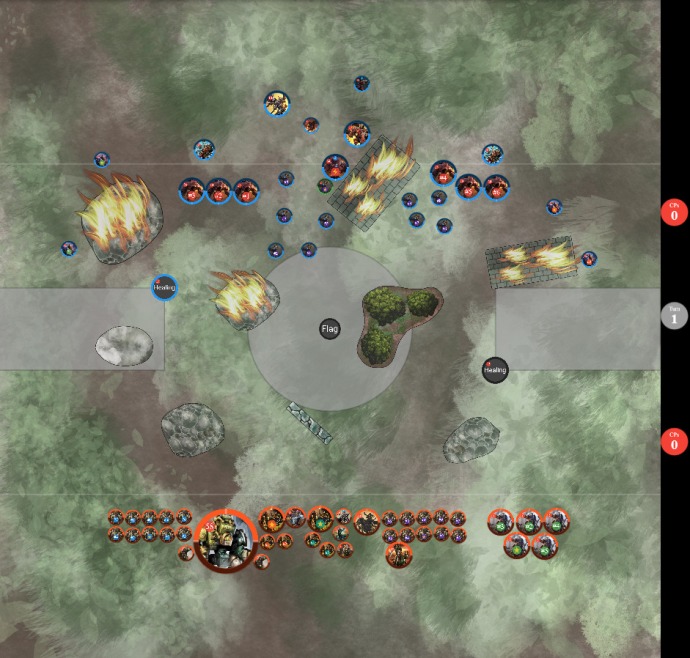 Turn 1: Mercenaries
All my stuff also runs. Allan’s limited threat ranges mean that I can just go full speed ahead with the Halberdiers as long as I don’t trigger Counter-Charge; even if any Marauders can get into a Halberdier I don’t really care. Fiona puts Roth’s Mercy on the Halberdiers on the right and eventually I end up putting Occultation on the Cavalry as the only things in range are spell-immune Risen. 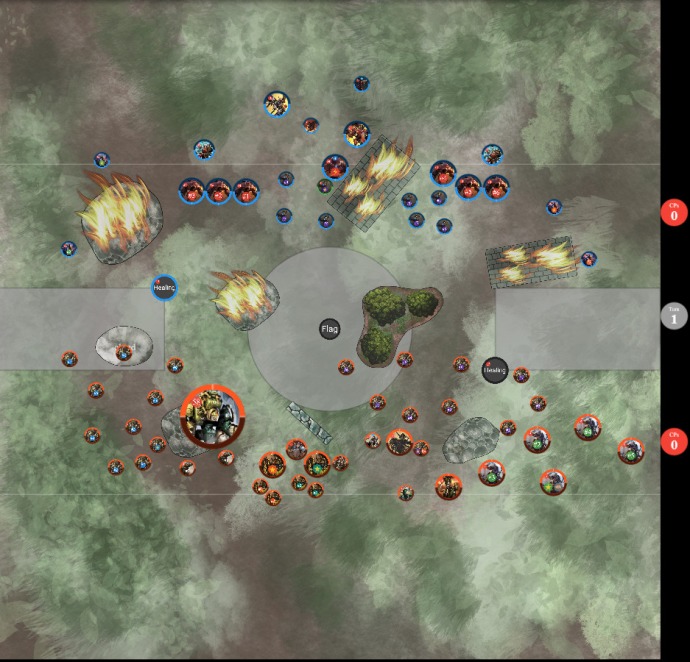 Turn 2: Khador
Karchev upkeeps Battle Charged but nothing is allocated. The Risen run and the Thamarite Archon shoots them in the back to create a cloud wall on the left. Over on the far left the Eliminators kill a couple of Steelheads, but they’ll be back. I forgot to take a screenshot.

Turn 2: Mercenaries
The Cavalry and Halberdiers on the right kill off one Eliminator; annoyingly, I roll triple 1 on a damage roll for the other to leave her alive. The Cannon on the left takes a shot at Karchev which of course is Shield Guarded onto the Rager; Dez and the other Cannon knock down a couple of Marauders. The Blockader gets powered up by the Arcanists and immolates both Eliminators on that side and takes out the objective. Fiona uses her Feat but I forgot to note if she did anything else of interest. I score both the left zone and the objective for 2 – 0, but if I’d been playing a bit more cleverly I could have had the central zone (with one of the Cannon crews) and the flag (with Sylys or Dez). Annoyingly my screenshot didn’t save properly so I can’t upload it.

Turn 3: Khador
Battle Charged is dropped and three Focus are allocated between Marauders 2 and 3. The Thamarite Archon kills a few of the blocking Halberdiers on the left and Karchev picks off another but not enough to prevent anything going into the Blockader from having to sit in Fiona’s Feat. Karchev uses his own Feat and casts Jump Start to sort out those Warjacks that I knocked down last turn. The Marauder that can get into the Blockader cripples its right arm. Alexia creates a Thrall that rather helpfully misses it’s attack in the centre and most of the Warjacks on the right have to run to contest. No scoring so we stay at 2 – 0.

Turn 3: Mercenaries
The Blockader clears the left zone. All my firepower goes into the Marauder sitting by the flag but I can’t finish it. I was hoping to kill it and sit something on the flag, then run Fiona to the right zone and just win the game there and then which is why I didn’t Befuddle or Curse of Veils the big lump. In the end, the Steelheads on the right mess about and still fail to deal with the Eliminator and then Fiona just runs to the zone camping 7. I’m hoping that between that and the sea of Halberdiers that she’ll be safe from the Warjacks over there. I score the left and right zones; 4 – 0.

Turn 4: Khador
Allan’s in a tricky position here because he needs to get enough work done on my army without just ceding the scenario entirely. In the end, he allocates two focus to Marauder #6 and one to #1. The Thamarite Archon kills one of my Arcanists and a hatful of Halberdiers on the left. Sorscha puts Boundless Charge on Marauder #1 and it tramples into the Blockader killing three Halberdiers in the process. A second Marauder leaves my colossal on two boxes and the Forge Seer finishes the job with Hoarfrost. In the centre the last Risen and Thrall fail to kill the Halberdier, then various Marauders kill a bunch of Halberdiers but Roth’s Mercy ensures that the ones I need to stay alive are indeed alive. Karchev moves to the zone and tries to kill Dez but misses. We both score the outside zones; 5 – 1. 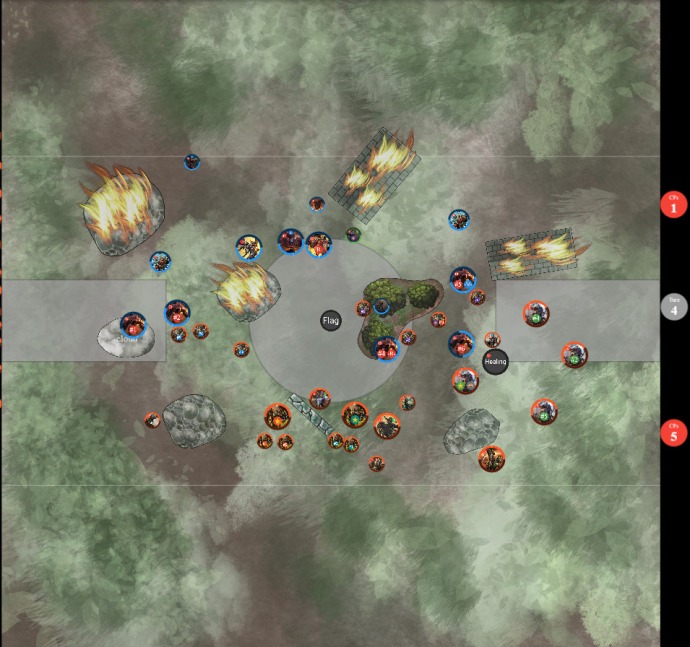 Turn 4: Mercenaries
I just move to contest the left zone and score the right again; 6 – 1. Mercenaries win by scenario.

That was a very fun game, and it was nice to have a game where it felt like I really had the tools to do everything needed. I think that I’m quite advantaged against this kind of list as I can snarl up the Marauders for ages with recurring Halberdiers and having a small number of quality melee attacks is exactly what I want to have stuck on Fiona’s Feat.