Here is Malifaux’s Guild Henchman, Francisco Ortega. The Malifaux internet community seem to be ablaze about how good this chap is, presumably a combination of his strong melee output and quality bodyguard-style abilities. He certainly is no slouch when dishing out damage up close, with Flurry, a good attacking stat and some decent damage tracks. Francisco plays well protecting others, with an action to place into combat and push other friendly pieces away, and his well-known ‘El Mayor’ ability to increase the defensive stats of a nearby piece. Notably, he can increase Perdita to Df and Wp 9, which makes her ludicrously hard to catch with normal attacks. Despite all that I find myself leaving Francisco in the case fairly often, as he is quite fragile for his cost (even considering his named upgrade to give him Hard to Kill) and is always a big target for the other crew. Probably if I played better I could use this bullseye on Francisco to bait the other player into some mistake I could capitalise on, but more often he’s gunned down or eaten by metal spiders before I get much value out of him. I suspect that part of this is just down to the way I play Guild, where I get most effect by having a large number of roughly equally dangerous pieces to spread the other crew’s attention across rather than a more elite crew.

Painting Francisco was a lot of fun. I purposefully kept the red coat as the only really brightly coloured part of the miniature to try to make more of a contrast with the browns of the rest of his clothing. His hair and mustache put me in mind mainly of classic photos of Frank Zappa.  The skin tone ended up a lot pinker than I had originally intended, as though Francisco has just come out of health spa before joining battle against the horrors of Malifaux.  Apart from his hilarious hat, I have to wonder at the design choice by Wyrd to give the miniature a massive cleaver of a sword considering his rules and fluff show Francisco as dextrous duellist. I would have thought that a rather thinner bladed sword would have fit the style more effectively. For comparison, here is how the Francisco looked in metal. 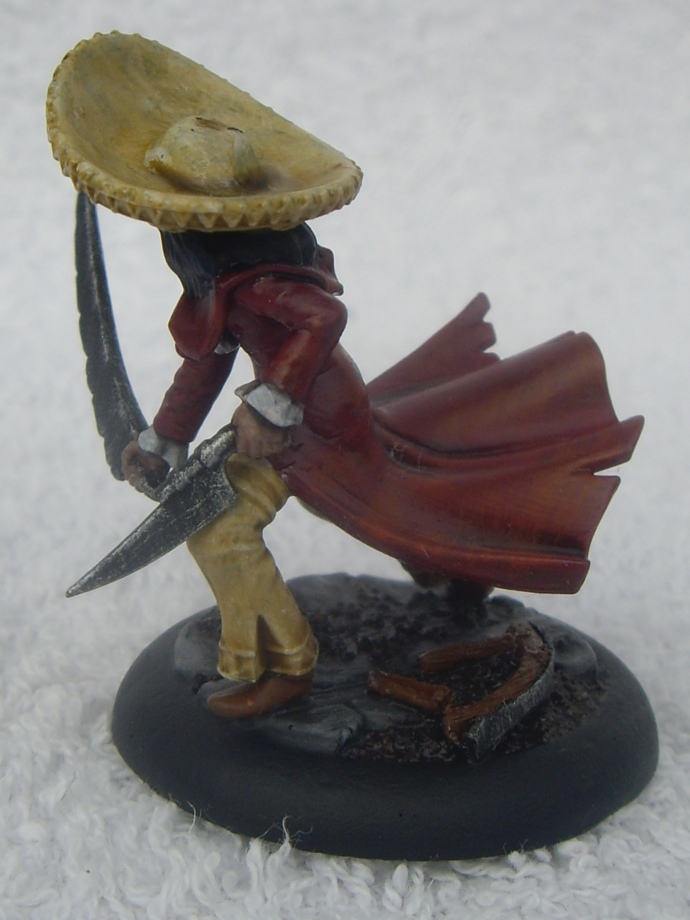 Next on the painting table: Perdita Ortega.