Posted on October 4, 2014 by Argentbadger

This is Yamaziko, another Henchman in the Ten Thunders faction. She’s thematically linked to Misaki, who I don’t own (yet… there’s a bit of a story about that), but thanks to the less ludicrous hiring restrictions in Ten Thunders now she can appear in any crew. I haven’t played as many games with Yamaziko as I’d like, but my general experience is that she’s not too hard to dispatch for anyone so inclined, and therefore I try to keep her slightly back from the front lines. She feels like a good option in Squatter’s Rights where she can support my fightier models with her Brace Yari action covering two of the markers. Yamaziko’s melee range is huge too, so her survivability can be improved slightly by engaging enemies with shorter melee ranges and forcing them to spend an extra action moving rather than killing her. As a Henchman, she can of course use Soulstones to last a bit longer but since I usually only take the minimum number of stones anyway this isn’t that helpful. In cases where I do take a lot of stones, it is usually because I have a more detailed plan for them than keeping an old lady fighting. A final use of her is to cheaply carry the Smoke and Shadows upgrade so Torakage do their tricks; this would be particularly useful when playing Stake a Claim.

Despite much use of Milliput I still couldn’t quite hide the massive gap in the right arm of Yamaziko’s robes. I chose a fairly drab green for the main colour with the hope that the lantern she’s carrying around for some reason would brighten up the overall appearance. But I didn’t really note that the lantern is only visible from the rear, so it doesn’t really make much difference. I did enjoy painting Yamaziko as the robe in particular does have some nice texture to it. This is a strange contrast to the face, which I found rather soft and devoid of much detail. 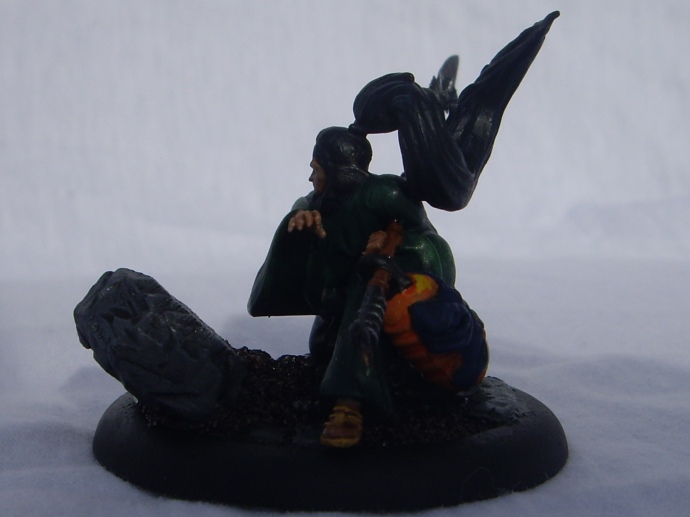 Next on the painting table: Metal Gamin.