Posted on December 4, 2013 by Argentbadger

It only took us about 4 months get through the first round of our escalation campaign!  Not a bad effort for us to play only 6 games each.  Anyway, it’s not like we’ve been playing only this one game system, or indeed that we’re in any hurry.  As with the 500 point level the opening game is me vs Furycat; a match up that saw my only defeat in the opening round.  My army is as per this post, but for convenience, here it is again.

Furycat had added a Witch Hunter and retinue of Free Company militia as well as bulking out his other units.  It is probably worth noting that Furycat has long been a proponent of how bad Free Company are, but put them in for story reasons.

We’re still using Battle Line until the next escalation.  Our reduced strategy gives us a Scree Slope in the South West, a building in the North West, a forest (which turned out to be a Venom Thicket) in the North East and finally a river (a Raging Torrent when we actually entered it).  I still fail to roll any of the Lore of Fire spells I like and hence end up with Fireball as usual.  Luckily Fireball is pretty good when all units are tiny.  Furycat wins the roll off and opts to go first. 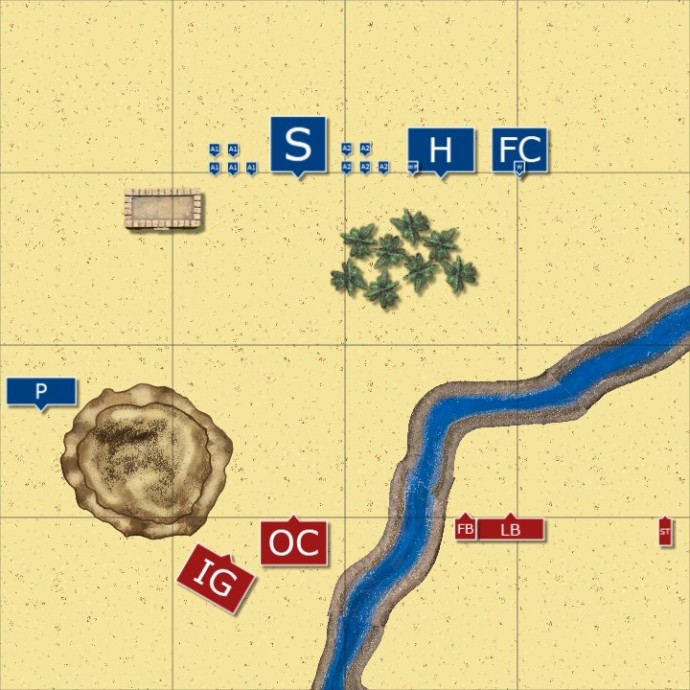 The Pistoliers saunter round the hill to be in maximum irritation position for the Ironguts.  The Archers find out that the forest is a Venom Thicket and the Halberdiers decide that they don’t fancy spending a couple of turns trudging through it being bitten by nasty little things so reform to head around it.  Both sets of Archers fire at the Leadbelchers, and, despite needing 6s to hit and 5s to wound, manage to put 4 wounds on them out of 10 shots.  Luckily for me the Leadbelchers don’t panic.  After that, the paltry single wound that the Pistoliers manage to put on the Ironguts seems a bit weak. 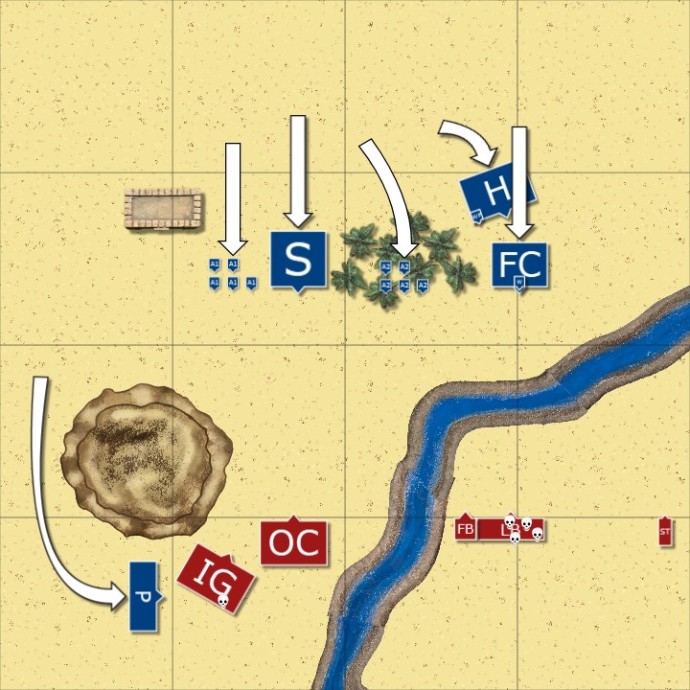 It may have become clear to anyone who has read this blog for a long time that I find Pistoliers very annoying so the Firebelly leaves the Leadbelchers and starts incanting at the riders.  We roll 2,2 magic dice and mid-sized fireball is sent to wipe out the Pistoliers which makes me happy indeed.  The Leadbelchers plink off a single militia man. 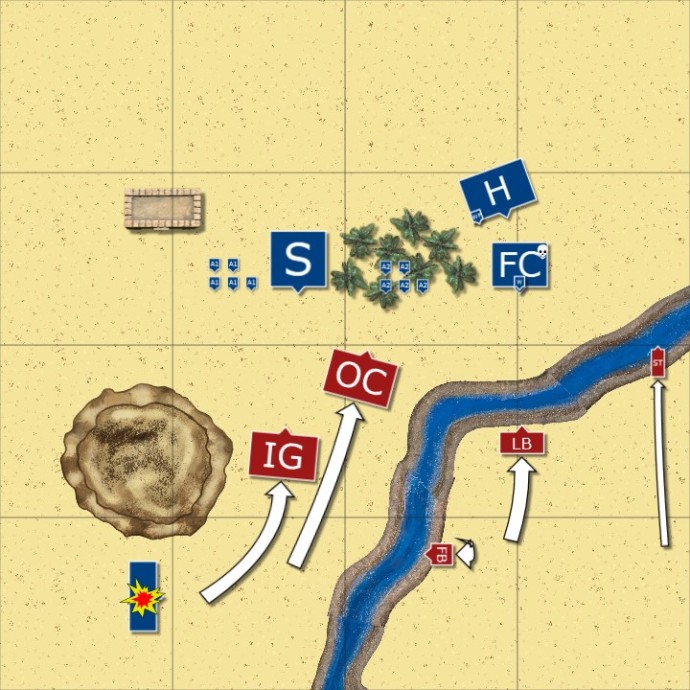 The Free Company and Spearmen both charge the Cows, making it but losing a handful of guys to the Venom Thicket.  For some reason, the left hand Archers charge the Leadbelchers.  Sadly, they roll terribly in the Raging Torrent, panic and flee again; presumably leaving the Leadbelchers looking rather bemused.  The Warrior Priest summons up 3,2 magic dice; Shield of Faith is dispelled but Hammer of Sigmar does go off.  The Archers who aren’t running like children fail to match their amazing volley of last turn, then we’re onto combat.  Bizarrely, everyone in the massive central scrum roll hopelessly but the end result is a narrow Ogress win which sees the Spearmen sent packing.  To rub it in, the other Archers also panic at this point; the Cows reform to maximise contact with the Free Company. 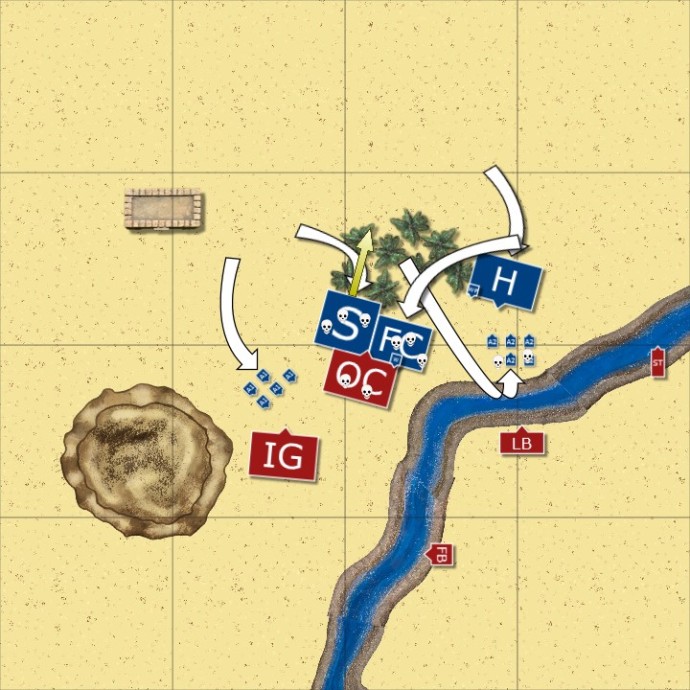 The Ironguts chase the Spearmen and Archers away making scary faces as they do so.  I roll a mighty 3,2 magic dice and put them all into the biggest Fireball at the Halberdiers which kills off a good chunk of them; the Leadbelchers kill off a couple more.  Those fleeing Archers are right in the way of the Warrior Priest’s unit and I’m quite happy for them to stay there.  The combat between Cows and Free Company continues to grind away at both units though the Free Company are taking most of the punishment. 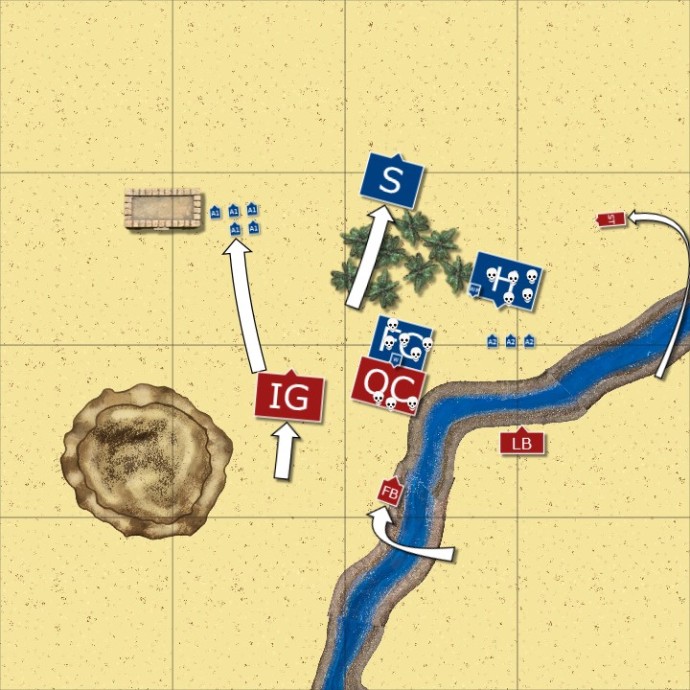 The Spearmen and right hand Archers rally, meaning that the Halberdiers are spending another turn just looking at the stupid peasants dithering in front of them.  Furycat rolls up 3,1 magic dice and gets Shield of Faith through (failed dispel) but I am able to stop Hammer of Sigmar.  The Free Company have finally had enough and break; irritatingly for Furycat a single militiaman also survives the run through the Venom Thicket, meaning that the Witch Hunter won’t be likely to rally.  The Cows restrain themselves and face the Halberdiers. 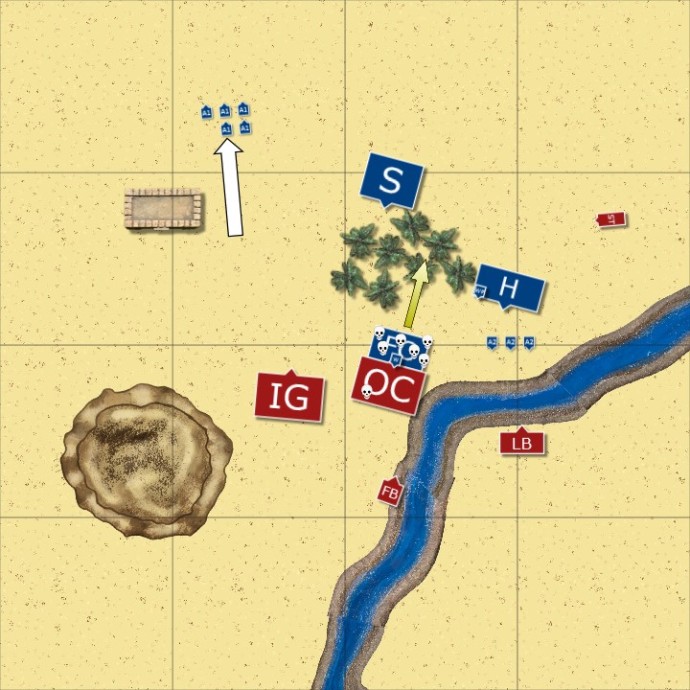 It’s probably worth noting that there’s no good reason to throw the Cows at the Halberdiers here.  I’ve got ranged attacks and would be better to stand off and soften them up a bit more.  On the other hand, that’s pretty boring for both of us, so in they go.  The Firebelly rolls up 1,1 magic dice and kills off a few of the fleeing Archers on the left with a small Fireball.  The main event is the combat though; the contact is quite small due to the presence of the Archers, and if there’s something that Ogres are good at it’s concentrating force into a narrow area.  The Cows win by the closest of margins but Furycat rolls high on his break check and the humans flee and are run down.  With only the Spears left against practically my entire army, Furycat has seen enough.  Victory to the Ogre Kingdoms! 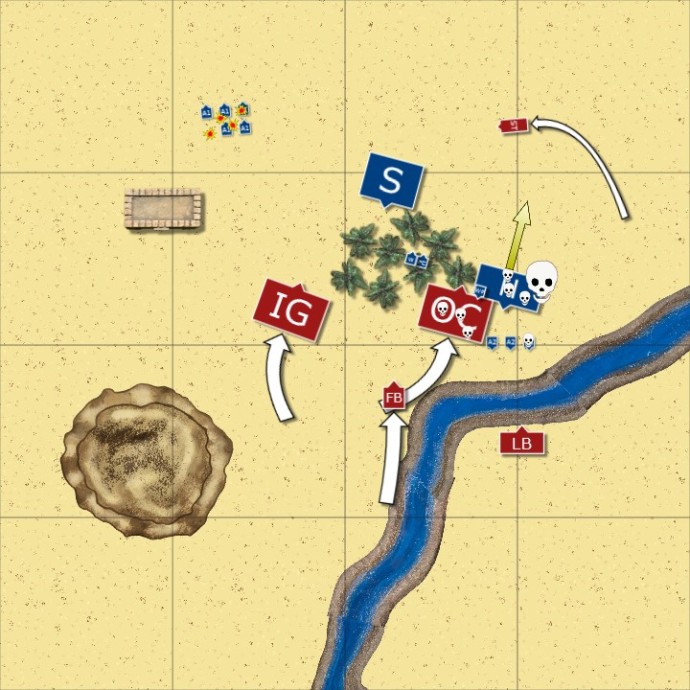 It was quite a strange game with the dice going hot and cold all over the place.  The Archers blocking off the Halberdiers meant that I could have focused all my attention on the rest of his force even if the Spearmen hadn’t rolled terribly and fled in the first combat round.  I didn’t do anything too clever and still got a heavy victory, though in fairness Furycat has knowingly selected some fairly weak units.  It’s always fun to play against Furycat whatever the game system.