After a certain amount of procrastination, Justinmatters and I played the first of many games we have lined up in turn 14 of the Border Princes campaign.  Somewhat arbitrarily, we selected one of the games in which the Orcs & Goblins have a small advantage.  I decided that I fancied a change from my usual fare and put down a pair of Giants as the first part of my list.  They’re stubborn on leadership 10 so I was thinking of sending them out together on a flank (i.e. far from the Orc BSB) and hoping to get lucky with terror, yell and bawl or one of the other amusing giant actions.  It’s amazing how small an army can feel when you take up almost a quarter of it with two Giants; even the few games I’ve tried with Ogres felt like they had more on the table than this.  The rest of the herd is fairly standard stuff.

Furycat has taken it upon himself to try and improve Justinmatters game play, and provided this list and (apparently) detailed instructions on its use in the game.  It feels like I’m playing against two men!  Still, they are allies in the campaign, so it’s fair enough.

Furycat’s detailed instructions go out of the window at the first opportunity, as Justinmatters forgets entirely about the chariots and fails to bring them to the table; we didn’t actually find this out until several days later.  The scenario is Dawn Attack with 9 terrain pieces, including 3 rivers (which I find awkward to fight across).  The hill in the South is a Temple of Skulls and everything else is either mundane or lying in wait for us.  Rolling for spells, the Orc Great Shaman takes Hand of Gork, ‘Ere We Go, ‘Eadbutt and Gaze of Mork; the first Night Goblin takes Gift of the Spider God and Itchy Nuisance and the other has Gork’ll Fix It.  Justinmatters rubs his hands in glee, which can’t be a good sign.  The Beastmen magic users both roll loads of doubles, thereby guaranteeing my favourite selection of spells: Melkoth’s Mystifying Miasma, Enfeebling Foe, The Withering, and Okkam’s Mindrazor on the Great Bray Shaman and Wyssan’s Wildform and Curse of Anraheir for the Bray Shaman.  I set up first, and the random deployment is something of a pain for my plan of using the Giants on  flank, as they are stuck in the middle.  At least they’re together.  The Wargor and his herd are way off in the East with everyone else (depressingly few hooves on the ground, now that I think about it) are in the far West.  The greenskins are focussed in the centre, though the Savage Orc infantry along with the BSB and Orc Great Shaman find themselves off in the West.

Everyone runs forward as fast as they can, with the Gors wheeling to try and get close to the rest of my army.  The Giants find that the wood they were planning on lurking in is a Wild Wood which promptly beats a wound off one and three from the other.  So, back to the previous plan of ramming them into the first mob to present itself.  I get 5,3 magic dice.  Enfeebling Foe is let through on the Big ‘Uns (-3S) but Curse of Anraheir is dispelled on the Boar Boyz. 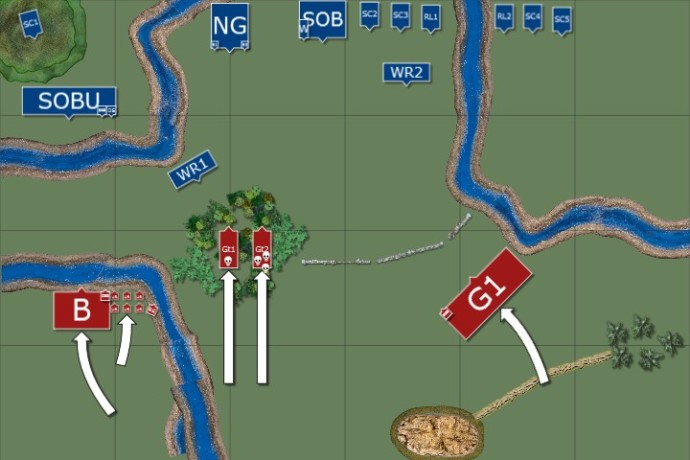 We forget to roll for animosity, and will for the entire game.  I guess these are just well-drilled greenskins.  There’s a bit of shuffling and the Shamans all bail out of their mobs, but most of it could have been done in deployment so it’s a mystery to me what was going on.  The Big ‘Uns move up to the river to guarantee that whatever fights them won’t be steadfast, and the Wolf Riders cross what turns out to be a River of Blood in the East.  With 4,4 magic dice, Itchy Nuisance is put on the Bestigors. I tried and failed to dispel it, figuring that spending even more time messing about in the river isn’t going to help my chances much.  ‘Eadbutt takes 2 wounds from the Great Bray Shaman, and Gaze of Mork kills a couple of Bestigors.  The artillery is a bit less successful, with one Rock Lobber missing by miles and the other firing a Goblin to his doom; the Spear Chukkas kill a few Gors but there’s plenty more where they came from.

There are no charges (I was tempted with the Giants but decided to play it safe).  The Bestigors lose a few to the Necrotic Ooze they’re mired in thanks to the Itchy Nuisance, and the Raiders quickly rethink their plan of hiding in the wood after seeing what it did to the Giants. For their part, the Giants move up to get in the middle of the Orc & Goblin line; the first one triggers a Fanatic that falls a little short of hitting him.  I dream of the glory of it spinning on to the Boar Boyz next turn.  The winds of magic give me a handy 6,4 dice to cast with.  Curse of Anraheir on the Boar Boyz is dispelled with a Scroll and Wildform is dispelled with dice, but in between I do manage to cast Withering (-2T) on the Boar Boyz. 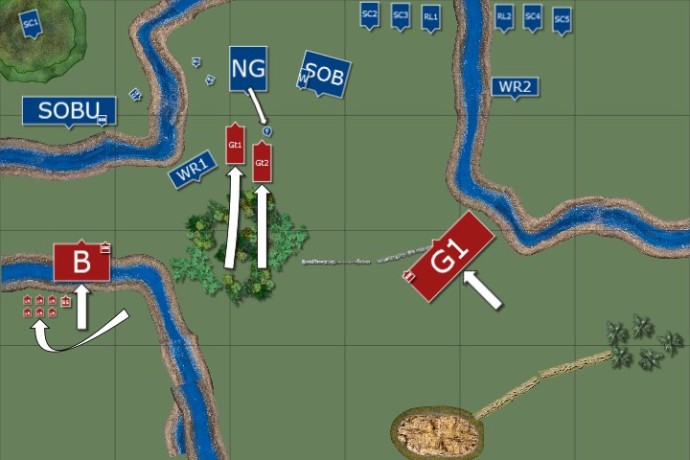 After some lengthy consideration of charging the Boar Boyz at the Giant and just taking the hits from the Fanatic like men, Justinmatters is talked back to sense by Furycat.  Instead, they move round to avoid a double charge from the Giants, although with a slight worry that the Gors will get into their rear.  Elsewhere, the Wolf Riders in the East move back over the river, presumably to get in the way of the Gors a little and the other mob grudgingly move to block one of the Giants.  The Fanatic spins through the Giant, taking the big guy down to a single wound.  The Orc Shaman uses all of the 6,1 magic dice to dispel both Enfeebling Foe and Withering, which saves me a bit of worry about what spells are going to do to me this time.  Again, the artillery kills a few Gors but nothing of note. 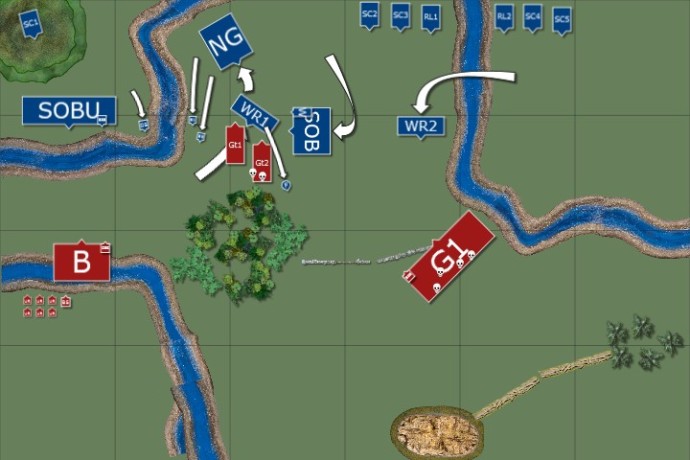 My ambushing Gor unit finally arrive, showing up usefully on the Orc & Goblin table edge.  One Giant charges the Wolf Riders, who can’t flee since that would open up alternative charges, and the other stomps over to the Boar Boyz [funnily enough we rolled the terror check which the Boar Boyz failed and were fun over until Furycat helpfully reminds us that the Savage Orcs are immune to psychology thanks to their frenzy].  The Gors charge the Wolf Riders in the East, who flee off the table to my significant surprise.  One of the Spear Chukkas obligingly panics too.  Finally, the Bestigors charge the Big ‘Uns over what turns out to be a normal river.  I only get 4,1 magic dice, but the Great Bray Shaman Irresistably casts Enfeebling Foe on the Big ‘Uns and is then killed by the magical feedback (which also wounds the Bray Shaman).  A casting of Wildform on a Giant is easily dispelled.  The Bestigors make the most of their weakened foes, beating them heavily.  It’s at this point I find out that the BSB is carrying the Crown of Command so the Savage Orc Big ‘Uns easily pass their check, although at least the frenzy is beaten out of them.  One Giant swings with his club, killing off the Wolf Riders, but the other one can only manage to kill a couple of Boar Boyz despite jumping up and down on them and is then killed for his troubles.  Still, at least the other one isn’t hit by his falling body; the Boar Boyz reform to face the newly arrived Gors (we forgot that they should have been forced to over run). 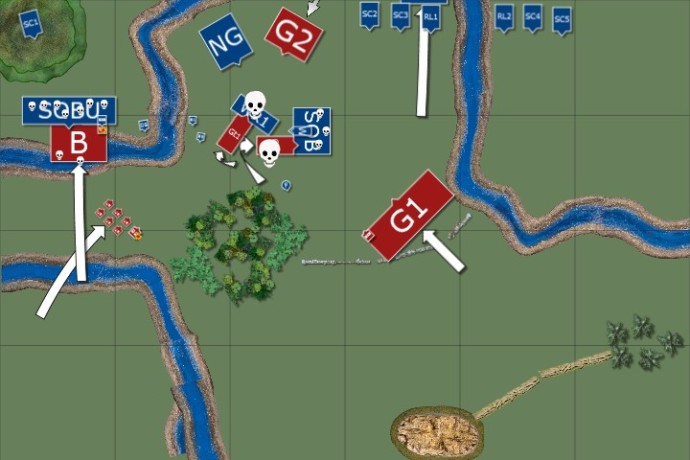 Buoyed from their simple felling of the Giant, the Boar Boyz charge into the freshly arrived Gors, and the Night Goblins charge the surviving Giant while he tries to wipe Wolf Rider from his club.  Justinmatters rolls 5,2 magic dice and starts off by trying to put Curse of the Spider God on the Night Goblins, which is dispelled.  Enfeebling Foe is dispelled (strength 2 Big ‘Uns aren’t likely to put much of a dent in Bestigors after all) and Ere We Go is scrolled.  After another fairly insignificant round of shooting, the Giant takes no wounds from the Night Goblins before yelling at them; they don’t seem to care.  A good round of fighting has the Gors trade kills with the Boar Boyz and even narrowly win thanks to their static combat resolution.  The Boar Boyz hold, of course, but at least they’re not frenzied any more.  The Bestigors spot the crucial link in the Big ‘Uns game plan: the BSB.  After a flurry of axes he’s gone and that’s it for the Savage Orcs – they flee after a close defeat and the Bestigors reform instead of chasing.

Turn 4 starts with the surviving Big ‘Uns being chased off the table by the Bestigors, who then pass their leadership test to redirect into the Orc Great Shaman, who is suddenly feeling lonely.  The Gor horde fail a charge that would have had them contacting 3 of the artillery pieces, condemning them to yet another round of taking spears and rocks to the face.  With 5,2 magic dice the Bray Shaman puts Curse of Anraheir on the Boar Boyz (let through); Wildform on the Gors is dispelled.  Justinmatters realised that I’d probably get both of those off and concentrated on making sure that he could dispel one of them.  The Bestigors carve the Orc Great Shaman down easily and over run into the first of the Night Goblin Shamans.  The Giant kills a handful of Night Goblins and holds after a narrow loss to static combat resolution.  Finally, the Warboss can’t do enough damage to the Gors to prevent the remaining couple of Boar Boyz from being pulled down.  He improbably fails his break check and gets away; the Gors gleefully pursue into the flank of the Night Goblins.  Justinmatters has had enough and offers his hand in defeat.  Victory for the Beastmen!

That was a funny old game.  Dawn Attack is always a bit weird because of the random deployment.  I quite like the challenge of re-planning as I go, but I know some people see it as undoing all the good work they put into getting the elements of their army list to work together.  I’m happy that I managed to win as I wasn’t feeling too good after the first couple of turn (especially when the Wild Wood beat both Giants senseless); I wonder how it would have gone with those Wolf Chariots tearing around.  The Wargor and his Gor horde didn’t get to contribute much to the game since they were stuck away from the remainder of my army for the whole game, and it was all over by the time they arrived.

I am not sure about the value of the double Giant list.  In fairness, they didn’t get a chance to do what I wanted because they were stuck in the centre instead of the flank where they might have done some good.  The hilarity of the Giant random attacks table didn’t get much chance to shine either since they weren’t in combat for very long.  So I will probably try the list again to see what happens, but the main weakness in my eyes is how thin the army looks on the table; I can get a mind boggling number of Bestigors, Gors and Ungors for the cost of a pair of Giants.