After a busy turn of combats in turn 13 of the Border Princes campaign, there’s been something of a mixed bag of results. From the perspective of the Beastmen, a narrow defeat to the men of Furycat‘s Empire was avenged by an equally narrow victory. My dreadful performance trying to invade Justinmatters‘ Orcs & Goblins’ home territory was made up for by two good results elsewhere (here and here) and a general good gaining of their ground. Further West, Aramoro‘s Bretonnians held Malko again (no report yet) and otherwise there’s a victory each in the skirmishes around the Old Silk Road West. Finally, an Empire army makes short work of an invading High Elf force from Forkbanger with a handful of hapless Gors along (briefly) for the ride.

Turn 14 is just as busy. The marauding Orc & Goblin banner that has been hoovering up territory in the Blackfire Mountains is finally intercepted by the High Elves and will have to fight their way free. All along the Old Silk Road there are more border clashes between the Empire, the Bretonnians and the High Elves, with the Empire fighting two battles against each of the others. That includes the regular scheduled clash in Malko as the Empire once again throw themselves at the heavily fortified Bretonnians. Foolish humans, they should be tearing down the walls of civilisation, not hiding behind them. The Beastmen rush South from the Old Silk Road to get to grips with another Empire force, but a bizarre merry-go-round develops around the Lower Thunder Road as various armies from both the Empire and the Beastmen chase each other futilely as the Benny Hill chase music plays. Finally, the Beastmen overrun of the Orc & Goblin homelands continues, with four battles in the offing. One of them is another attempt on the HQ territory while another is in the Iron Claw Orc Camp so we’ll get to play with some funky extra special rules. 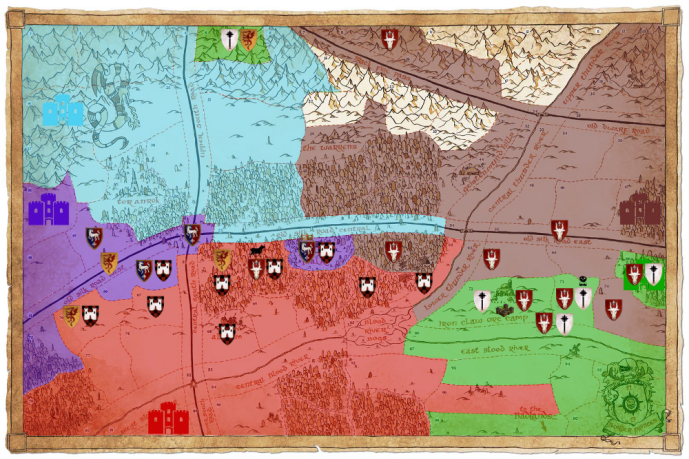 Here are the current scores, before we get on to any battles are fought.  With 11 games to play, there are far too many permutations for me to bother to work out anyone’s potential gains and losses.

So with only the battles from turn 14 plus the whole of turn 15 to go, Furycat is almost assured of overall victory with the sweet plastic prize it brings.  In the fight to be best of the rest, Justinmatters’ Orcs & Goblins are sliding dramatically down the rankings having been top dog for the early phases; in effect they traded a voracious assault by the Empire for an equally ferocious over-run at the hands of my Beastmen.  Forkbanger’s High Elves are the big winners of the late stages of the campaign, taking advantage of some good alliances to keep their lands safe while picking off isolated territories.  Aramoro’s Bretonnians are still desperately fighting to avoid trading their onions for sausage as the Empire unrelentingly attack them across all fronts, but holding onto Malko will probably decide their fate in the campaign.