The final battle from turn 13 of the Border Princes campaign was another scuffle between my Beastmen and Justinmatters‘ Orcs & Goblins.  Frankly, after the high stakes game over the greenskins’ home territory this seemed like a playful scrap between old friends (er, which it is).  I made a conscious decision to use as few proxies as possible for this game, which dictated my army fairly effectively.  Indeed, only the Minotaurs weren’t represented, though they did take part as unit fillers for the Ungors.  Of the following list, I don’t have any Harpies at all, normal Ungors were doing duty as Raiders and the Minotaurs were filling out the ranked Ungor herd.  Also, the small Gor herd is unpainted.  OK, so it’s not that much of a big deal, but playing without proxies is more or less unheard of in our gaming group.

Justinmatters took a similar list to the one that soundly thrashed me earlier, losing the Trolls, the Rock Lobber and the Night Goblin Shaman and generally tidying up the bigger units.

Appropriately, it’s a Battle Line.  We only roll the minimum five terrain pieces, but one is a Settlement of Order (again) which has an Acropolis of Heroes represented by a tower among some Blazing Barricades (wooden stakes in the picture, apparently they haven’t been lit).  Fittingly, there’s an Idol of Gork (or possibly Mork) in the North with Blessed Bulwarks stretching incongruously away from it.  The lonely looking building in the South West is a Haunted Mansion that we instantly forget about.  The Savage Orc Shaman takes Fists of Gork and Gaze of Mork to keep favours even between his gods.  For about the third game in a row, I get all my favourite spells: Melkoth’s Mystifying Miasma, Enfeebling Foe, The Withering, and Okkam’s Mindrazor on the Great Bray Shaman and Wyssan’s Wildform and Curse of Anraheir for the Bray Shaman.  Sadly, there’s no Wizard’s Tower for the Bray Shaman to relax in.  The small Gor herd go in ambush, but I reason that there’s nothing that the Raiders are going to be able to achieve in the backfield so they stay in my deployment zone to get in the way of everyone as usual.  I take first turn, but with these two armies, neither of us is concerned about taking that extra round of shooting before combat.

The ambushing Gors are right on their game and arrive in the West, right behind some slightly startled looking Squig Herders.  Everyone else simply sets off at a run; there’s no point hanging around waiting for the Orcs to advance when we can meet them half-way.  I do forget about the Harpies though, silly me.  I start the magic off well with 5,4 dice.  The Bray Shaman puts Curse of Anraheir on the Big ‘Uns, partly to slow them down, partly because they’re a huge unit and mainly because I know Justinmatters hates the spell with a vengeance.  The Squigs are Enfeebled for -2S, but an upgraded Miasma on the Arrer Boyz fails. 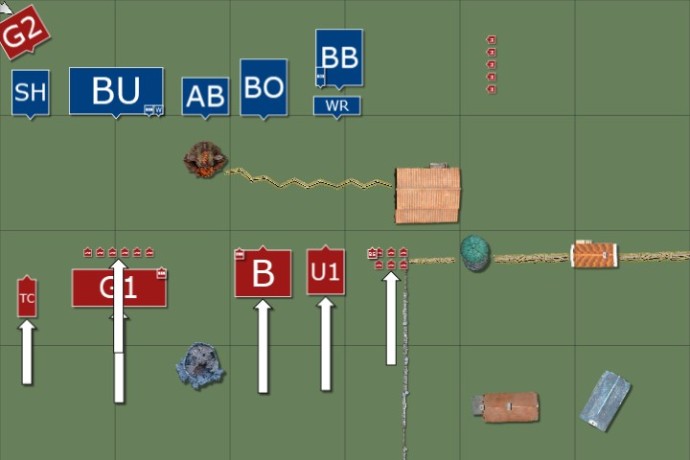 Everyone passes their animosity checks.  The Squig Herd reforms to face the ambushing Gors who inconsiderately arrived behind them.  Presumably just reforming without losing half of the herders is quite a feat for the unit.  Other units mill about a bit, the Big ‘Uns don’t risk marching thanks to Curse of Anraheir and the Boar Boyz move backward for no apparent reason.  The Shaman get 6,4 power dice but the phase itself is something of a trade.  I dispel Fists of Gork, and in turn Enfeebling Foe is dispelled.  Apparently I didn’t need to worry about my failure to hex the Arrer Boyz as they fail to do anything at all to the Bestigors.

It’s turn two and there are realistic charges on.  That makes me a happy Beastmen player.  The Harpies charge the Wolf Riders, who realise that they’re too close to flee and hold instead.  The ambushers charge the Squigs and the Bestigors fail to charge the Black Orcs.  In the West, the hapless Raiders get sent to hamper the Big ‘Uns.  Poor little chaps.  Their counterparts in the East move into one of the many buildings, unsure of what to do with themselves, though the Bray Shaman realises that Wildform is going to be needed on the other side of the table and sets off behind the battle line.  Finally, the Ungors move up to try and tempt the Boar Boyz into charging over the blessed bulwark, and hence dangerous terrain.  This turn we only get 2,2 magic dice.  Wildform on the Harpies is let through (interestingly, I don’t think I’ve ever cast it on Harpies before; there are usually bigger units that need it more) and Enfeebling Foe (-2S again) works on the Squig Herd with the Savage Orc Shaman failing to dispel it.  Level 4 versus level 2 wizard can make a big difference, though you do have to pay for it.  The Wolf Riders are beaten soundly by the steroided Harpies and the survivors are run down, though this does leave the Harpies with their flank presented to the Boar Boyz.  The Gors kill a bunch of Squigs, but not enough to break their steadfast and so they hold thanks to the presence of the Warboss.

The Boar Boyz happily charge the Harpies and the Big ‘Uns accept that they’ll have to fight through the Raiders to get to a foe worthy of them.  Magic comes up 1,1 to Justinmatters’ horror, and he throw both dice at dispelling Enfeebling Foe.  It comes up just short; I know how that feels.  Amazingly, one of the Boar Boyz is killed by a Harpy, but only one of the winged pests lives long enough to flee from the combat.  The Boar Boyz choose to restrain, presumably to offer a counter charge if necessary when the Black Orcs are inevitably charged by the Bestigors.  Needless to say, the Raiders are wiped out.  After a lot of thinking about it, Justinmatters elects to keep the Big ‘Uns where they are having worked out that he would contact the Chariot first and give up a flank charge to the Gors.  The Squigs are beaten mercilessly again, and this time they’re not steadfast.  They need a 3 to stay in combat…and get it.  Dang.  Still, at least the number of actual Squigs left is getting manageable; I’m not so worried about the Goblins. 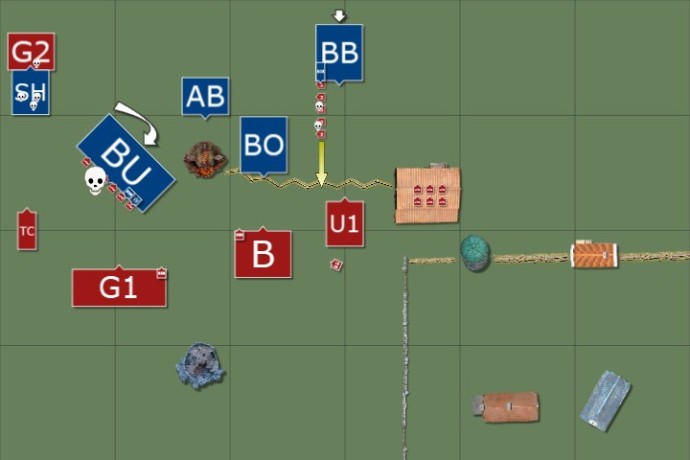 The Gors and the Tuskgor Chariot both charge the Big ‘Uns; it’s on for the big scrap.  The Bestigors make their charge on the Black Orcs this time.  Meanwhile, the Ungors move up to the barricade (I reasoned that the benefit was better than a tiny chance of killing any Boar Boyz with dangerous terrain, and more importantly it blocks off a flank charge on the Bestigors) and the Raiders in the building move out to get in the way a bit.  I roll 4,3 magic dice.  Withering on the Big ‘Uns is scrolled but Wildform on the Gors works after a failed dispel.  The combat between the Gors, the Tuskgor Chariot and the Big ‘Uns is every bit as epic as we hope, with amazing casualties on each side, including the Orc BSB under a dog pile of goat bodies.  After we collect up all the dead models to work out the combat resolution, it emerges that the Orcs came off significantly worse, and need insane courage to stay in the fight… and get it.  Still, neither side can take another round like that one.  The Squigs finally get tired of being hexed and beaten up, fleeing from the Gors (or more accurately perhaps, the demise of the last Squig lets the Goblins herding them know that it’s time to leave).  The Gors reform to face the flank of the Arrer Boyz.  The Bestigors do me proud and smite the Black Orcs mightily despite the penalty for attacking a defended obstacle.  It’s enough for both the Black Orcs (who flee) and Justinmatters (who offers me his hand in defeat).  Victory for the Beastmen! 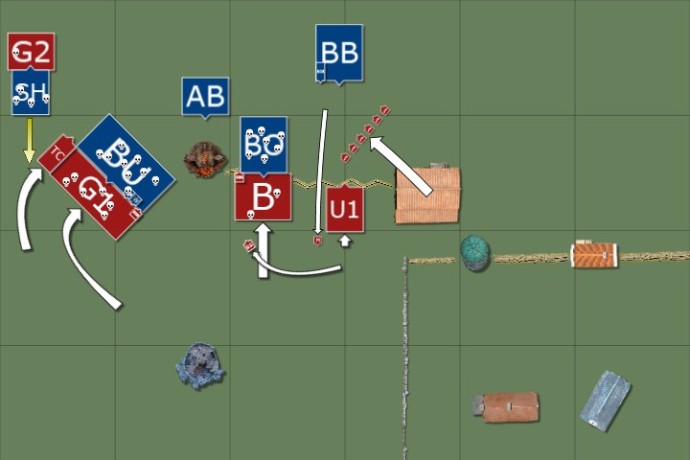 This was one of those games where almost everything seemed to go my way, and nothing went for Justinmatters.  The only bit of good luck he had was holding with the Squigs and the Big ‘Uns when needing low numbers, but that only delayed the inevitable.  In the case of the Big ‘Uns, they certainly couldn’t have taken another beating like they took in the first round against the Gors, particularly since they’d have to suck up all the attacks from the Gors first (at S5 thanks to Wildform and the Beast Banner).  For my part, I had good luck with the dice just where I needed it, starting with the ambushing Gors arriving in the first turn just where I wanted them, and continuing for pretty much the entire game.