I got a set of the new Minotaurs from eBay and contrary to popular opinion, I found them to be very nice sculpts, provided that your definition of ‘nice’ includes ravenous cow-men intent on eating everything that they can get to stay still for long enough (which mine does).  My only quibble with them is their feet / hooves / flippers (seriously, I can’t think of them without using ‘flippers’ in my head after reading that post), so of course something had to be done about them.

The ‘official’ photos of them on the GW site don’t do them any favours at all. They all have dull, static poses and a paint job giving extreme definition of their already ripped muscles.  There’s not much I can do about the paint job unless I suddenly become an ‘Eavy Metal standard painter, so it’s going to be all about the posing (and sorting out the feet, of course).  Here are my attempts at this.

I took the hooves from two farmyard toy cows which will now live out the rest of their days in my son’s toy box (but slightly closer to the ground than usual).  The hooves and the bottoms of the legs were drilled, and I used bits of a paperclip to pin them together – partly for strength since the hooves are made of a plastic not likely to take well to polystyrene cement and partly to give me a base to put Milliput around.  Even this is by some margin the most optimistic ‘sculpting’ I’ve ever attempted, and so I have pretty much just tapered down from the butch, mighty legs down to the somewhat narrower hooves.  Although I would say that normal cows do have rather narrow hooves when compared to their legs, I’m not sure that it looks so great on Minotaurs, who, after all must make do with only two legs, and are probably drunk most the time anyway.

Firstly, after saying that I didn’t like the static poses of the GW Minotaurs, I decided that this dude with a great weapon looked best just standing threateningly. 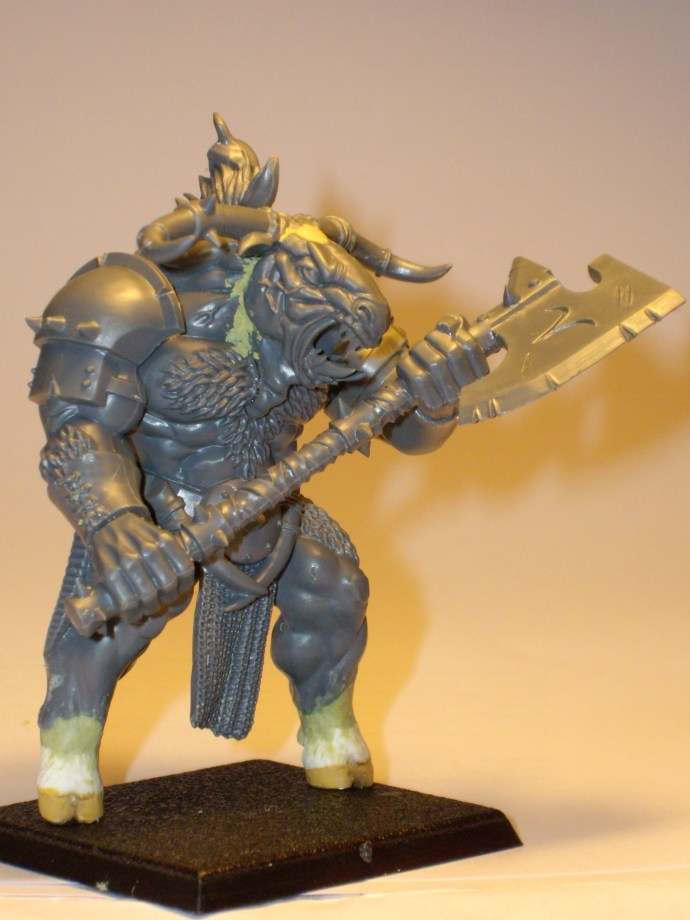 I hoped to give these other Minotaurs a bit of life by leaning them slightly forward, as though they are running headlong at their foes / lunch.  The leg poses are a little stilted, but I think that even small alteration is enough to make them look more like crazed killers than cow-headed steroid abusers (although I can hardly deny that they still look like that too). 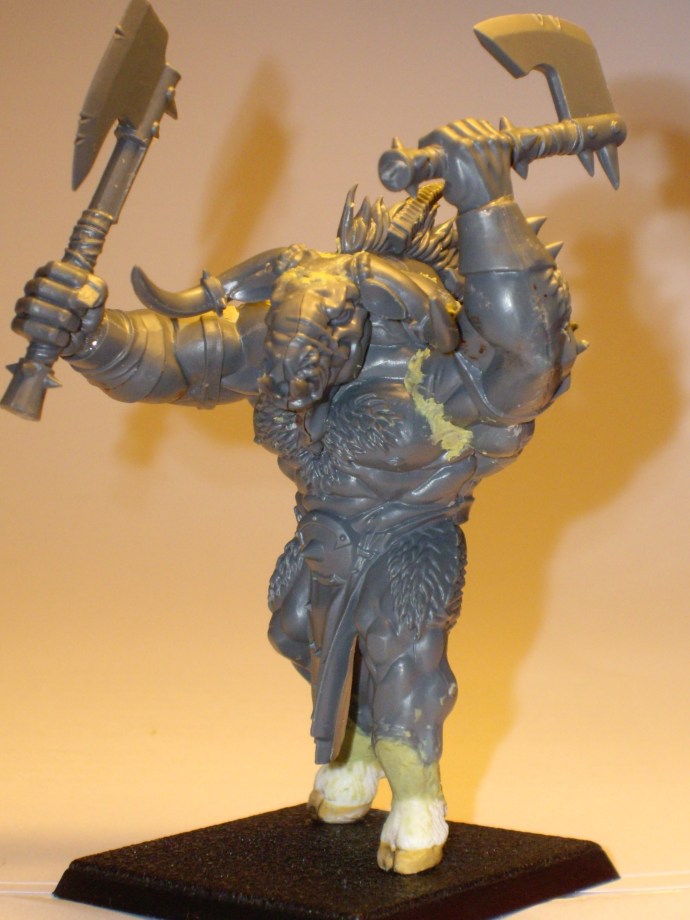 Anyone paying full attention will note that there is some blood on them already.  I managed to nick my thumb with my knife while assembling them, so I guess they got a very early start on their Blood Greed.

Truly, they are the usurpers of our position in the food chain.

2 thoughts on “Minotaurs made”